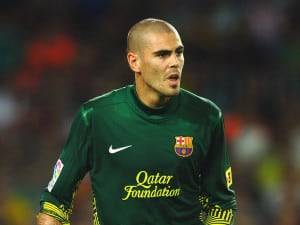 The Stadiums of Spain

A trip to Spain, for most, would not be complete without a visit to one of the top stadiums in the World to take in some of football’s finest talents in action. The before and after match delights are always part of the fun, with a few tasty tapas and a cool glass of beer or wine never far away.

Here we look at our top ten favourite grounds to visit when in Spain.

Europe’s largest football stadium, boasting a capacity of just under 99,000, is home to the club that many regard as the biggest in the World. You are always guaranteed a spectacle on match days with some of the World’s best players and officially the best, Lionel Messi, for the last 4 years to entertain you. On any other day you can visit F.C. Barcelona’s museum, the highest attended in the City, or one of a number of club shops dotted around any one of the numerous famous tourist locations.

The second largest stadium in Spain is home to Real Madrid, named the team of the last century by UEFA. A club steeped in history and tradition, the Bernabéu is named after the President that transformed their fortunes and made them the institution that they are today. In the heart of one of Madrid’s wealthy business districts the Bernabéu stands out as a major attraction and with player’s of the calibre of Cristiano Ronaldo and Gareth Bale taking the pitch in the famous all white, you won’t be disappointed.

Taking a seat at the home of Valencia C.F. is not for the faint hearted with its steep banking high stands a feature of this ground, home of Spain’s third most successful club. A popular tourist destination due it’s coastal location, the Mestalla is definitely worth a visit when you are in town.

Madrid’s 2nd most popular team has its home on the banks of the river Manzanares, which was a former name of the ground and some still refer to it as such. A road runs beneath the riverside stand creating a unique feature. The club’s supporters are fanatical of their team and a red hot atmosphere is always guaranteed from the current Spanish Cup holders. Diego Simeone, the Argentine coach who also played for the Colchoneros (mattress makers, in reference to their red and white striped shirts) has restored Atlético to former glories and a trip to the city wouldn’t be complete without taking in a game involving Diego Costa and co’.

Sevilla F.C. Are one half of what makes up the fiercest city rivalry in Spanish football. Their stadium is in the City centre and is considered by many to be the middle class team of the city. A ground that for many years was considered the national team’s spiritual home still boasts an intimidating atmosphere for most away sides and a club anthem, that is sung acapella at the start of matches, will have the hairs on the back of your neck standing on end.

Sevilla F.C.’s great city rivals and a club with a proud history and tradition. Whilst Sevilla F.C. Were allowed to continue during Spain’s Civil War, Betis ground was closed and used as a weapons and vehicular store. Betis will always guarantee a warm welcome to away sides, but on derbi day the atmosphere is red hot. The Southern stand behind the goal appears as an unfinished part of the stadium, but is where the most fiery fans congregate to orchestrate the stadiums noise.

As yet unfinished, with the 3rd stand still awaiting completion, the new San Mamés sits right next to site of the old “Cathedral” of the Spanish game which was demolished this summer. A fervently loyal support that has only ever seen players from Basque origin represent their club create a unique atmosphere on match days. Why not venture into the city after the match for some pintxos, the local form of tapas accompanied by a cool glass of txakoli, a local white wine.

A highly popular destination for many holiday makers, the Rosaleda was redeveloped for the 1982 World Cup and again around ten years ago. Around 20% of the club’s members and season ticket holders are ex-pat’s living on the Costa del Sol. You can enjoy uninterrupted views from any part of the stadium and apart from the visits of Barça and Madrid, ticket prices are usually not excessive. After the game enjoy some boquerones (anchovies, usually fried, or marinated in vinegar) a local favourite and nickname of the club.

Home to Deportivo La Coruña, the Riazor stadium sits by the shore close to the beach and boasts a fantastic atmosphere on match days. Although having been relegated again, the club’s fans have not deserted them and it has one of the hottest atmosphere’s outside of the top flight. Add to this the local cuisine and a fine beer that sponsored the club, Estrella Galicia, and you have a proper excuse to watch some second tier football.

Athletic Bilbao’s great rivals, Real Sociedad or Erreala locally, are a club with a rather varied recent history. League champions in the early 1980′s, La Real have since been very much an up and down side. The last few years have thankfully seen a resurgence in their fortunes and they are now back amongst Europe’s elite in the Champions League.