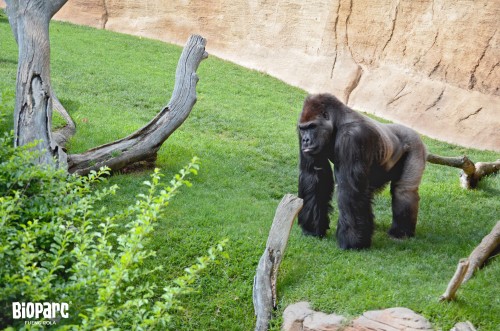 Yes, this is it. I am into my final two days in Fuengirola and the Costa del Sol before I set off for Valencia. I see that I have got a lot of work to do to cram everything in before I go to the Levante. Many people ask me what it is about Fuengirola that attracts me and has made it my base since 2008. I am sure some of the other writers like Ali and Ros have shown off the town in a favourable light so today I will focus on two unique Fuengirola institutions. Tomorrow I will have a quick round up of the PEOPLE that make Fuengirola so special for me.

Anybody who knows me, knows that I am a HUGE fan of animals. I can’t, don’t and wouldn’t want to hide it. Over the years, I hope I have done my bit and added my grain of sand for various animal charities throughout Spain. So, obviously I am excited to have BIOPARC on my doorstep. For many years it was known as Fuengirola Zoo and, in all honesty, many people still know it as such. The correct name nowadays, is however, BIOPARC. It is almost in the town centre and just a few minutes walk from the bus and train stations, near the bull-ring and the back of the town hall. It has a sister BIOPARC in Valencia which it works with very closely and I am very excited to be going there next week too. Guess I could have put a spare crocodile in my suitcase!

For my part, the most special thing about these two BIOPARCs is how close the animals are to living in a natural environment. It’s not a case of seeing rows and rows of mammals in glass cages. It’s really very impressive how they have worked so hard to get this natural environment. I quote, “Bioparc Fuengirola champions a new model of zoo based on respect for nature and the preservation of natural species, a model which has already established itself as a flagship for Europe. What Bioparc Fuengirola represents is a different concept of zoo. A zoological park where animals live side-by-side, recreating their natural habitat and so fostering their development at all levels. Visitors are stepping inside a true documentary of the deepest tropical woodlands.”

The other thing that impresses me is their commitment to saving endangered species. There are a huge number of species that are perilously close to extinction throughout the world, BIOPARC is working tirelessly to save many of these species with professional breeding programmes. For this they work with a network of other zoos on an international basis.

Prices of admission are very reasonable and I recommend the season ticket, the “Berde! Pass.” This represents superb value. They have an excellent website in English and Spanish.

The Salon was built in 1925 in the very centre of town, just yards from the main square and bus station. It ran as a Spanish theatre until 1956 when it was turned into a cinema. It showed films in Spanish and once a week films in English which was a wonderful treat for the ex-pats in those pre-Sky/pre-internet days. By the 1980s there was a groundswell among a group of expats to turn the cinema back into a theatre – this time for the ever-growing, English-speaking population of the coast. With the blood, sweat and tears from this hard-working core of dedicated people, most of whom are still very active in the theatre today, everything was changed – except the name – and the place we all know and love as The Salon Varietés was born.

It opened its doors for the first time on June 14th 1985: on the bill was one Bernard Stanley Bilk – better known as Acker Bilk, accompanied by his Paramount Jazz band.

The Salon offers a wide choice of productions: musicals, drama, revues, comedies and farce making it a unique cultural centre for foreign residents and visitors alike. Over the years it has become a hub for this transient community by offering a cultural and sociable place where people can come and enjoy a wide and varied choice of theatrical experiences.

It has an excellent website where you can get full details of the upcoming shows and book your seats online.

What better way to give you a taste of the Salon than to reproduce with their permission the current newsletter.

Hello and welcome to the Salon’s April Newsletter!

It’s time to tell you all about the SALVA programme for April.

Don’t miss…well, you can’t miss…. (see photo!)…Yvette, Rene and Mimi! They´ll be in ‘ALLO, ‘ALLO! at the Salon 10-15 April. This is a comedy based on the famous BBC sitcom of the same name set in Rene’s cafe in Occupied France during World War II. Rene has to deal with – in no particular order – the German Army, the Gestapo, two amorous waitresses (and therefore Rene’s wife….), the Resistance, a cockatoo seller and ……Adolf Hitler in various shapes and sizes!

Sausages, cockatoos, a painting of a top-heavy Madonna, banging upstairs, inflating a rubber Hitler…yes, all your favourite innuendoes are served up chez Rene. With Francis Butler as Rene and Talk Radio Europe´s Hannah Murray as Helga!

Later in April Elvis Presley and Tom Jones take the stage for 3 nights in a great show entitled
ONE NIGHT IN LAS VEGAS! Expect all the classic songs from those two giants of popular music as the Costa’s top showmen, Johnny G and Ricky Lavazza, perform this dazzling tribute. And, fellas, completing that Vegas atmosphere are two stunning Vegas showgirls….
On for three nights only: 17, 18, 19 April. 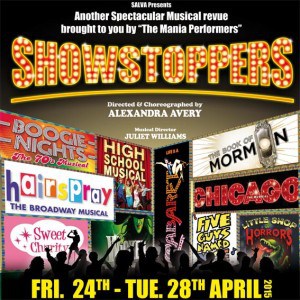 A mere week later, ladies and gentlemen…and….it’s… SHOWSTOPPERS!
After the successful productions of MOVIE MANIA and MUSICAL MANIA, the fabulously talented cast known as the Mania Performers have another hit on their hands!
Hold on to your seats as they take you on a magical, musical journey from London to Broadway!
Join them as they recreate the spectacular sensations CHICAGO, BOOK OF MORMON and SWEET CHARITY, feel the power of CABARET, WICKED and BLOOD BROTHERS, the adrenalin of HIGH SCHOOL MUSICAL, HAIRSPRAY and 5 GUYS NAMED MOE and the vibrancy of BOOGIE NIGHTS and LITTLE SHOP OF HORRORS!
Directed, produced and choreographed by Alexandra Avery, the truly dynamic and vibrant cast of 28 performers promise you, “the Best End of the West-End!……with the hottest talent in town!”
MANIA PERFORMERS PRESENT ………………SHOWSTOPPERS!
24 – 28 April

And, not strictly April but strictly May 1st sees Jordana’s MADONNA TRIBUTE at the Salon with all those great songs and, ladies, two husky male dancers!

There is also a momentous event taking place in June. This latter has been planned by FOTA (Friends of the Theatre Association) and takes the form of a superb concert celebrating the 30 years since the Salon Varietes became the only English-speaking theatre in Southern Spain.

Full details will be given later.

Book over the www on www.salonvarietestheatre.com

PS Don’t forget to keep an eye on the website and the Facebook page. That way you won’t miss a treat as sometimes things happen at the last moment.