While Spanish families spill onto the local streets, from apartments boasting multi-coloured awnings and freshly bleached steps, dressed in their Sunday best – I sit in the Glorieta (Santa Pola Town Square) with my writer’s uniform of jeans, sweatshirt and trainers. Nobody takes any notice though, they don’t care.
Waiters in fresh white aprons gracefully (and with some skill it must be said) weave between tables; stepping over dogs and children camped beneath their feet, and always bearing the proud moustache that seems to come with the job…although most of the waitresses have opted out of that one.

I’m aware that I have to get an article finished for one of the local newspapers and begin to get up as Juan, the café bar owner, saunters over and puts his hand on my shoulder to stop me.
‘Dónde vas?’ he asks, Where are you going?
‘I have to work.’
‘But so early?’
It’s 10.30am.

My second coffee (ordered by Juan and endorsed by Lolis, his wife who is behind the counter) arrives, along with the Sunday newspaper, followed by Juan’s advice, ‘It’s Sunday, relax.’ So I do. But rather than read I reflect on why so many people still come to Spain. It’s not rocket science I know, great climate, friendly people and a whole new way of life.

Despite, or perhaps that should be, in spite of, the current crisis gripping not only Europe but the whole world Spain’s draw to foreigners has hardy made a blip. Properties remain relatively cheap and plentiful and with banks (and the Spanish government) looking at ways to boost not only property sales but tourism too – Spain is becoming an even more attractive place to be.

The cost of living in Spain means you cans still eat (in or out) very reasonably and travelling around on trains or buses throughout the country is a cheap way of seeing what is a beautiful, and vast, place.
My friends are thinking of making the move over and I’ve told them to come over and take a look at what’s on offer here, and I don’t mean just the houses. That’s the simple bit. They’ll go to the estate agent confident that they only sell houses with all the necessary paperwork to complete the sale, and that’s pretty much it for them. Apart, that is, from spending the next few weeks perhaps looking for new furniture and items for the new house.

No, I want them to see the way of life. To be in the town square on a Sunday morning and watching life going on. I want them to walk my dogs with me as the sun climbs over the Mediterranean horizon and I want to show them that Spain really is a land of opportunity should they feel the desire or need to begin working.
But most of all I want to show off what a great life can be had out here, on very little money – it’s all about taking your time. I love Sundays.

Tomorrow is Monday, but that’s fine because often a Monday in Spain is the same as a Sunday…but I don’t have to get dressed up

Real Madrid and the Town Hall of Santa Pola have signed an intentions agreement for the construction of a house/museum in memory of Don Santiago Bernabéu will hold the largest collection of objects in his memory.”The museum will be a pilgrimage destination for Madridistas who wish to learn about part of the history of this Club”. The museum will comprise the house in the state it was when Bernabéu inhabited it, as well as objects and photographs that recall the former Real Madrid President. There is already a beach/bay named after him as well as a street in the town.

Please note unless otherwise stated all posts re Santa Pola and Gran Alacant are provided by scribe Dave Bull from AllAbroad magazine. Please contact him for further information. © Dave Bull 2012 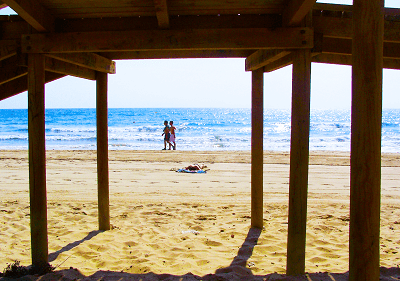