IT HAS NOT been a bad couple of weeks for Spanish football. First they romped to victory over a lacklustre Italian side to clinch Euro 2012 and on Sunday won the Euro 2012 under 19 Trophy against Greece. The only thing left this year would be to take Olympic Gold against the much-fancied Brazilian team, in August. Obviously the Spanish are doing something right and if you have a football mad youngster running riot with boredom this summer, and you think he might have more than average talent, there is one event that you probably won’t want to miss; the Elite Stage Acatec 2012.

The two day event is not for the faint hearted. It’s designed to both recognize and develop talented youngsters aged between eight and thirteen, who will be put through their paces, have one on one coaching and tuition and be evaluated by former and current professional coaches and players. The Elite Stage takes place on the weekend of 25 and 26 August at the Hotel Golf Campoamor in Orihuela, which this week hosted the Málaga football club. The ‘stage de élite ACATEC 2012’ or Elite Campus Acatec is completely focused on teaching children between the ages of eight and thirteen about the keys for becoming a success in the world of football, what it’s like to play in the first division and what is required to be able to reach those levels.

The classes are taught in Spanish but some of the coaches and a few of the older participants are bilingual, so you need not worry if your son or grandson does not speak or understand Spanish. Participants in the elite stage Acatec 2012 will have the opportunity to experience a weekend just like the professionals from Malaga plus other La Liga and Premiership academy players and football professionals expect. Everyone will receive thorough preparation to help them enhance their technical and tactical skills and, if they have not been keeping active this summer, their fitness!

The ‘stage’ as it’s called in Spain, features coaches with proven experience with Spanish first and second division teams. They know exactly what is expected of children in this age group and have been conducting other ‘stages’ around the Alicante region this summer, allowing them to directly compare those they have already been coaching and those on this short but intensive weekend course. And while many of the top youngsters out there are maybe playing in the Municipal School system but not getting the notice they deserve, several scouts from La Liga and 2A teams will be watching on with interest, looking for tomorrow’s academy players, to booster their own squads!

Angel Linares, Director of the ‘Elite stage Acatec 2012’ added that “This year Acatec launched an unprecedented initiative in Alicante, offering Elite football Camps focused on training kids to reach the top in the world of football. Our goal is for all participants to improve on their technical and tactical ability, that’s needed to become a professional footballer. Any player who wants to engage in football must understand and effectively assimilate the tactics of the major Spanish football schools, to be able join them. With us, everyone plays with intelligence, attention and concentration. The secret is to help you learn, instead of us teaching! Our challenge is to recognize potential talent and develop it to the fullest extent possible.”

Also on hand is Francisco “Paquito” Escudero, the former director of sports at Hercules and current Professional Scout for Elite Stage Acatec 2012. There are two prices, €299 for full board and €219, if no overnight stay at the hotel is required. The course is over two full days, from morning to night, with time for relaxation, classroom tuition and meals all included. All participants must be between 8 and 13 years (categories of benjamín, alevín and infantil). If you register before August 8, 2012, you will receive 20% discount. on your registration. For more information visit the official website of the stage: www.stageacatecelite.com and find out what has been happening this summer by ‘Liking’ them on Facebook. A fabulous opportunity for today’s youngest footballers to be all that they can be in front of top La Liga talent scouts. 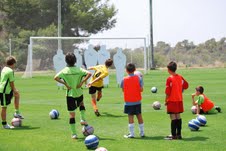