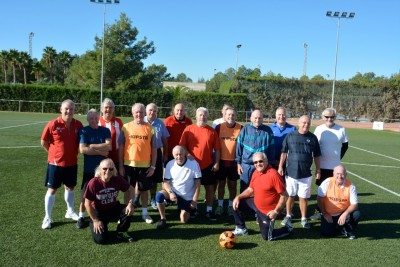 Taking football in your stride

FOR THOSE of you that enjoyed playing the beautiful game in your youth, even those with dodgy knees and hips, have the opportunity to possibly play once again. Designed for the Over 50’s, the newest craze to hit football for years is not rolling around in the grass faking injury, biting opponents shoulders or trying to intimidate the ref, but that of ‘Walking Football’.

While there always exceptions to the rule, such as the late, great Sir Stanley Matthews, who in 1957 became the oldest person to play football for England, at the age of 42 years and 104 days and managed to stay fit enough to play until he was 70, and those such as Manchester City’s Asa Hartford, who at 64 can still put many youth players to shame, for most former players, while the mind may be willing, the body sadly lets them down. However, research says there’s no reason why you shouldn’t play when you’re in your fifties or sixties or beyond and that age shouldn’t stop you playing football and according to Peter Reddy of Aston University, you may be able to break Sir Stanley’s record, although admittedly at a more modest level.

With that in mind, for those that would like to relive their youth at a much more modest pace, the first Walking Football team has been launched in the area. They play on the Los Montesinos five-a-side pitch. Anyone interested can meet in the Football ground car park at 10.30am for the first one hour session that will be split between fitness exercises, ball training and a kick about, plus a basic introduction to the rules, which in essence means no running; no sliding tackles and no kicking the ball over a certain height.

While the session is primarily aimed for those in the Los Montesinos area, it’s hoped the idea will spread and other teams will sprout up around the region. All that’s needed is a T-shirt or football shirt, shorts, track suits, with only trainers required for foot wear. Players will have to sign a disclaimer re accidents, illness etc.

Anyone wishing to know more about Walking Football should contact Stan by e-mail: montestan@gmail.com to either join in or find out more about starting your own team in your region.