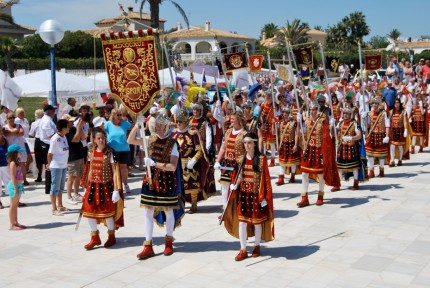 Summer time fun in the sun

SUMMER has well and truly arrived, along with almost a million visitors to the Southern Costa Blanca and Costa Cálida. No excuses for not being able to find anything to do after you have had enough of the beach, pool shopping or just relaxing,, as the calendar is full if you are trying to find something to keep yourself busy. Over the month of August, Torrevieja becomes Playa del Madrid, as more than half a million descend on the city to enjoy the atmosphere and beaches.

There are a couple of major events over the next couple of weeks which might be of interest. All week on the Paseo Vista Alegre there are concerts, discos, bouncy castles for the kids, and of course, the hippy market and fun fair for your enjoyment. On Saturday August 4, popular Spanish singer Manuel Carrasco will perform in Torrevieja’s iconic Eras de la Sal. Meanwhile sports fans can head over to the Vicente Garcia, where FC Torrevieja play their first preseason friendly, kicking off at 8.00pm with their second warm up game next Wednesday, August 8. In the Municipal Theatre on Sunday, August 5, there is a dance performance of ‘Beat Under Sun’ at 9.30 pm.

Looking forward to next week, one of the major events, mainly for the younger set, is the ELECTROMAR Day in the Antonio Soria Park, which starts on Saturday August 11 at 6.00pm and goes through the night until the very early hours of Sunday morning. It features the best in indie and tehno music, plus a pool party, bars, fun activities and non stop partying, through the night. For those of you seeking something a little more cultural and Spanish, you will be able to experience the traditional Zarzuela, ‘El Duo de la Africana, on both Saturday and Sunday in the Teatre Municipal, starting at 9.30 pm.

Just down the coast, enjoy the Mil Palmeras fiesta from August 2 through 5. The festival celebrates the saints day of Ntra. Sra. de la Alegría. On Thursday 2 August activities get underway at 10:00 am with the opening of the Fiesta with fireworks and a fanfare followed in the evening with Children’s games. disco in Plaza Mil Palmeras and performances in the la Nueva Plaza. On Friday at 11:00 am there is a sand castle competition and in the evening Children’s activities including storytelling, balloon twisting and face painting, games, competitions, pet walking show and at 10.00 pm the ‘Miss Mil Palmeras 2012’ contest followed by karaoke contest in the Nueva Plaza. On Saturday you might see a few pirates running around town giving out ‘surprises from 2.00 pm and in the evening another pet walk, Musical parade and at 11.00 pm an animated show in Calle Comercial called ‘Release of bulls’. On Sunday 5 August at 11:00 am there is a Drawing competition at the restaurant Olympia, a Treasure Hunt at noon, the landing of the Ntra. Sra. de la Alegría and procession to the chapel, followed by mass at 7.00 pm, followed by Street Entertainers, at 11.00 pm the ‘Release of bulls’ finishing at midnight with a Firework display along the Paseo Riviera

Torre de la Horadada are holding their Mariners Market starting this week. A crafts market with 45 stalls offering everything from traditional craft tools to jewelry and home made food will take place on the Paseo Sardinero. The special market will be open during the evenings from 7:00 pm to 01:00 am. The Mariners market runs from Wednesday 1 August to Sunday 5.

Almoradi Moors and Christians is one of the major festivities in the region when Almoradi honours their patron saints of San Abdon and San Senen. This year, the festivities started on the 27th July and continue with daily activities until the 5th August. There are lots of events organised including the final of the domino competition, petanca competition, early morning parades, late night parties, antique bicycle exhibitions, football match with second division Elche CF, entrance parade of the musical bands, the Moors and Christians as well as the re-enactments of the seizing of the castle.

Highlights include on Thursday 2 August at 810 pm the gathering of all the companies of the Moors and Christians at the Teatro Cortes followed by a short parade along Tomas Capdepon to the Plaza de la Constitucion, finishing with the opening ceremony and partying into the night from 11.45 pm. Friday, Saturday and Sunday’s parades start from 8.00 am finishing in front of the castle, with the main activities starting at 8.30 pm.
The final day starts with the parade at 8.00 am Sunday. At 11:00 am: gathering of the Moors in the Kabila and the Christians in the Caballeros Templarios, each company then parades (one Moor, one Christian etc) until everyone is in the Plaza de la Constitucion 11:30 am: Negotiation of the Barril (barrel) in the Plaza del Constitucion with the festivities concluding in the evening starting at 9.00 pm with a repeat of the 11.00 am festivities, at 9:30 pm: negotiation by the Christians followed by them seizing the castle and closure from 11.00 pm with partying in the headquarters of the Companies.

For those that like to savour the flavour, the town of La Union have put together a gastronomic experience to coincide with the International Festival of the Cante de las Minas. A selection of local restaurants will be offering specially prepared midday menus from Tuesday 31st July to Saturday 11th August 2012. The menus range in price from €6.00 per person to €40.00 per person, something to suit everyone! Lots to see and do over the month of August. 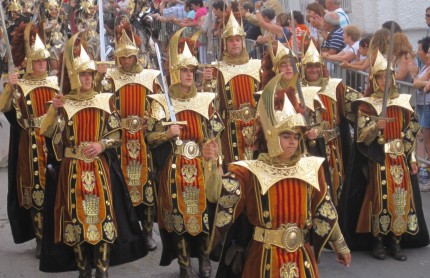