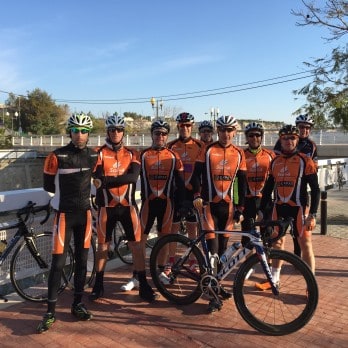 On Sunday 13th March 2016, ten members of Team “Cyclogical” based in Ciudad Quesada travelled to Albudeite in Murcia to participate in the 1st Marcha Cicloturistica, Albudeite Rio-Mula Sportif, the “Albudeite Sportif.”

The team left from “Cyclogicals” shop in Quesada at 6.00am and travelled in convoy along the AP7 heading for Murcia where they picked up the Almeria road following it for 20kms then heading up towards Mula where the tiny village of Albudeite sits tucked away at the bottom of a valley. When we arrived at 7 am it was like a ghost town and freezing 3 degrees in fact and there was not a cloud in the sky but the sun had started to pop up and it looked like it was going to be a beautiful day. Registration started at 8am just outside the Ayuntamiento so we all proceeded to the nearest restaurant for coffee and tostadas which soon warmed us up. The guys were first in the queue to collect our registration and goody bag after which we returned to the cars to prepare our bikes and kit. The car park had begun to fill up so it made sense to be there early. The race was well organised and started 15 mins late at 9.15am with a mass start following the pace car which was brilliant the group soon thinned out as many of us left the town and started climbing however the pace car kept slowing down to make sure everyone was together as part of the Police requirements at some of these events. We had only gone about 15km when we were passing through the first village at about 40km per hour and hit some speed humps most of us were airborne and when we landed many water bottles had jumped out of their cages and started running down the road including Binnsy’s. No one stops for them as it is too dangerous. Ten minutes later this tall lean Spanish semi pro looking cyclist caught up with Binnsy and tapped him on the shoulder to give him his bottle back. He had stopped and picked it up and chased Binnsy to give it back! Now thats Sportsmanship for you. There were over 200 riders participating and 2 of our guys were taking part in their first event – Phil Nobbs and Big Dave Bliston who were both a bit nervous at the start but soon settled in and found their own pace. The Route was well sign-posted with plenty of helpers, dispatch riders and police motorcycles assisting to marshal the route. Every village and town that we passed through had most of the village out shouting us on. 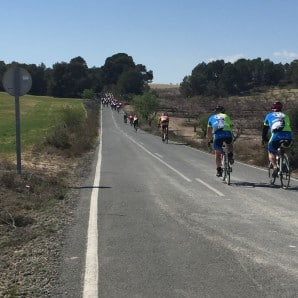 The course covered a total distance of 90kms with just over 1200 metres of climbing involved which was an easy route and ideal for beginners. Most of the route was neutralised (following a pace car) but there were various parts where we were free-running including a timed 6km hill climb with an average gradient of 7%. Most of the fitter guys all sprinted up here to try and secure a trophy. At the half way point there was a compulsory food and water stop for approx 30 mins which also allowed the slower riders to catch up. Our two begineers Phil and Big Dave have only been cycling road bikes for 6 months and were taking part in their very first Sportif. They both performed really well and were delighted with themselves as it is at an event like this that you find out just how fit you are as you can compare your ability against others and not just your own guys. Once we had all crossed the finish line we had baguettes, beer and music before the prize giving ceremony. Sniffer was not only one of the oldest competitors in the event but also won the trophy for the fastest up the hill climb in his age group (65-75) and was chuffed to bits. We were all really pleased for him when he went up onto the stage to collect his trophy. He just looked like Rocky Bilboa in a Rocky film. “Well done everyone and here’s to the next one.”

The Team who took part were Malcky Murray, Alan Quearns, Owen Desmond, Richard Binns, Gary Routledge, Dave (sniffer ) Robertson , Big Dave Bliston, Phil Nobbs , Graham Kinghorn and Darren Heath. All of the Team had an excellent day’s cycling and returned to Quesada for a well deserved beer and a good laugh. The guys are now looking forward to riding up Xorret de Cati next week then returning to Monforte in April to participate in this year’s event. The team would also like to thank all their sponsors for their continued support, Sol-4 investment consulting, Expat pensions and investments, Arrow rent a car, Shenanigans bar, Spanish insurance, Securidan, Pulse core fitness and Ambience fires and solar.

Team “Cyclogical” meet every Tuesday and Thursday night at 5.30pm and Sunday mornings at 8am. We cover between 90 and 120kms at a moderate to fast pace so if you fancy a challenge come along and join us. Looking to improve your fitness, riding ability and speed and also have a new group of friends to train with? Then why not come along and give it a try or call Gary on 637 487 377? 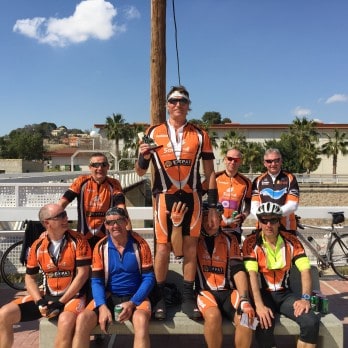