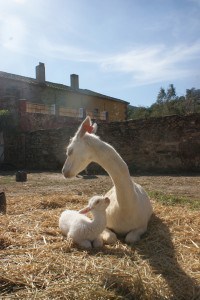 Alan Parks moved to the campo near a town called Montoro in rural Córdoba in January 2008. His partner, Lorna and he had a dream to start a new business breeding South American animals called alpacas. They bought an old, part renovated Olive Mill and packed up their old lives and headed off in to the sun. Little did they know that the worldwide crisis was about to have a huge effect on their lives. During their time in Spain they have had heartache and delight with these amazing animals, witnessing both miraculous births and also sadly deaths of animals they have loved. The latest addition to the farm is called Gabi, pictured with her Mum, Bermuda.

After many different false starts Alan and Lorna now invite people to come from all over Spain to meet their alpacas at their farm in the olive groves. If you would be interested in a visit and meeting the alpacas for a once in a lifetime experience you can see more details here

You can read more details about the books and Alan’s life at www.whats-an-alpaca.com