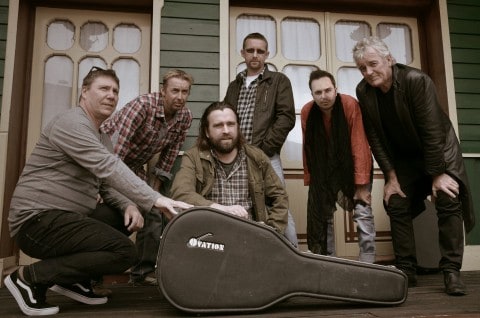 DESPERADOS – The coasts new ‘Supergroup’ recreate the unforgettable sound of the ‘EAGLES’.

Back in 2014 Steve Nelson and Michael Dickinson had an idea, to join forces and create an ‘EAGLES’ Tribute band. These 2 highly respected musicians each had their own band (Shack,Attack and Monkey Tennis) and by combining this talent they formed DESPERADOS. Along with Simon Goodwin, Carl Parry, Bastian van de Sant and Kasper Jensen, Steve and Michael set about creating a show that is all about the many ‘EAGLES’ hits that people instantly recognise. Most importantly, the harmonies unique to the ‘EAGLES’ sound.

Steve first came to the Costa del Sol in World cup year of 1982 along with his wife Kate and Cris Gorvin (bass). They first worked at the Papillon Bar (where Burger King now stands) at the Las Palmeras Hotel, Fuengirola. In the Mid 90s Steve formed the band “Mid Life Crisis” who were the house band on many of the Maurice Boland TV shows. Steve then played regularly at The Chicken Shack in El Chaparal where he formed the band “Shack,Attack” and they played on the beach every Sunday afternoon for 4 glorious years, which made them one of the most popular bands on the Costa del Sol. Since March 2007 Steve and the band have been playing every Sunday afternoon at POGS Irish rock pub.

Michael was born in Berwick-upon-Tweed in the north-east of England just south of the Scottish border. Michael learned piano from a very early age, Saturday mornings spent with brother Mark at piano lessons. After giving up on the classical training aged 15 he began to develop his own style, influenced by the likes of Billy Joel, Stevie Wonder and Paul Weller, Michael joined a Berwick based band playing Stones, Hendrix and Clapton etc. In 1999 at the age of 21, Michael decided to have a trip to Spain to sample something new and found himself playing piano in a restaurant and being paid! He then formed an acoustic piano/guitar duo with an estate agent that had found him an apartment for rent. They called themselves Monkey Tennis due to a shared liking for a certain comedy programme. Many different musicians have come and gone as Monkey Tennis members in the following years but Michael remains the frontman for what is one of the most respected groups on the coast.

Simon Goodwin first started to learn to play the guitar at the age of 11 in his home town Oldham, but by the age of 16, switched to the bass. Influenced by the styles of Mark King and Pine Palladin and his passion for jazz funk. Playing in local bands, Simon soon made a name for himself on the Manchester music scene. At the age of 20 he turned professional as a session player, and worked with some of the world’s top entertainers. By the age of 24 he found himself involved with Steve Steinman from ‘The Meatloaf Trilogy’ and ‘Vampires of Rock’, where he stayed until his move to Spain in 2000. Simon met Steve Nelson through a mutual friend and the rest is history. Simon says, “It’s not the size of the stage or how much you’re getting paid, its having a laugh that counts, and Steve and I haven’t stopped laughing since we met !!”

Bastian van de Sant aka “The Doctor”, was raised and studied in Arnhem, Holland. He started to play the drums at the age of 12, and played in different bands with own songs and as a freelance drummer for different Dutch artists. Bastian recorded 3 cd’s with Dutch rock band “Bittermoon” and toured with : Brian Robertson (ex.thin lizzy) and Rob Lamothe (ex.Riverdogs)
Bastian came to Spain in 2003 and plays regularly with “Monkey Tennis” and “The Cops”.

Carl Parry, originally from Froome in Wales, Carl spent his formative years watching and learning the drums from his father Keith. At heart though Carl always wanted to rock out on the guitar. Self-taught from an early age, Carl was heavily influenced by the likes of ACDC, The Small Faces and Thin Lizzy. In the early 90s Carl joined a rockabilly outfit called Frenzy playing lead guitar and in ’93 toured in Japan to packed out venues.
Carl moved to Spain’s Costa Del Sol in 2005 to help run his families bar in Fuengirola, but was soon playing again, firstly with Shamrock and then Loony Toons. Then once again Carl was back out to Japan for another tour with Frenzy. Returning from the Japan tour he joined Monkey Tennis, where he remains playing both the guitar, and when necessary back on the drums holding it together for the popular trio.

Kasper Jesen, born in Denmark and raised in Spain. Kasper has played guitar since the age of 12, and has studied music at Berklee, Boston and audio engineering at SAE in Liverpool. While studying in the UK, he also toured with some of the top bands on the circuit. Since then, Kasper has been focusing on recording for his original project (StereoSnakes.com) that has taken him and his singer, Nicole Allan, as far as Nashville and L.A. to write and record, as well as collaborating with some of the great musicians on the coast.

Over 6 months later, and after 100s of hours of rehearsals (some performed live before unwitting, yet appreciative audiences), ‘DESPERADOS’ will premiere at the Hot Summer Nights concert on Friday 7th August in the Mijas auditorium with a 90 minute show of the very best of the “EAGLES”. With instantly recognisable songs like “Hotel California”, “Take it easy”, “Lying eyes”, “Desperados” (of course) and many more this will be a very special night.

Information about tickets for this concert is on www.ticketsource.eu/bigmpromotions or call 952661819/667759355