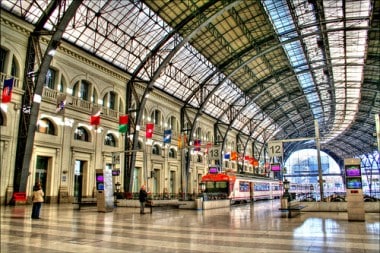 Fanciful architecture and hip restaurants have come together with the sunny southern Spanish climate and beaches to transform Barcelona in just a few decades from rough port city to one of Europe’s – if not the world’s – premier destinations. In fact among all the European cities, only London, Paris and Rome attract more visitors than Madrid and Barcelona. Just in the period 2000-2006, Barcelona had an incredible growth of 98,61% in visitors whilst London actually decreased by nearly 16%. Whilst some of this can be attributed to Ryanair’s flight network into Girona and Reus Airports and other low cost airlines flying into Girona, Reus and Barcelona, there is more to this increase than just cheap flights. In world terms Barcelona is a compact city and a superb and expanding metro (underground) make this an ideal city for a short trip. Many of the major sights are within a short distance and are priced realistically. Since the hugely successful Barcelona Olympics in 1992 with the unforgettable views from the Montjuïc stadium, tourism has become a major economic impetus for the city. The city is also often cited as being more tourist/inward-investor friendly than Madrid …….and of course it has the favourable Mediterranean climate. Certainly, English is much more widely spoken in Catalonia than in the capital. Accommodation (see separate section) can be diffcult to find at the right price unless booked in advance even though the number of beds has doubled to 50,000 per night in just 12 years. There are Barcelona hotels in all price categories and catering from backpackers with tight budgets to the most discerning business client. With the success of Vicky Cristina Barcelona, all eyes are set on continuing record numbers. Enjoy!

Barcelona has a long and exciting history and many museums and exhibitions showcase this history. Obviously, the Sagrada Familia is a pull for thousands every week and there are dozens of other sights that warrant any visitor’s time. Tourist buses offer a great way to see all the main sites and in just 4 or 5 hours you can get an overview of what the city has to offer. From the Olympic Stadium to the Camp Nou, from the port area to the beautiful Estació de França, from elegant Sarriá  and the Barrio Alto to the poorer areas hopping on and off the buses is a great way to see the city. (Quality commentaries are available in English using headphones) Barcelona has also a reputation of being a fun-capital and every weekend the city is filled for stag-nights, hen-fights and soccer fans in town for the big soccer games – all looking to enjoy themselves and all behaving themselves under the watchful eye of the police forces because the city is proud of its “safe” reputation. Don’t forget to leave time for one of the cities other great attractions – people-watching. Grab a coffee on Las Ramblas and you will see all the world go by!

MiniGuide.Es have produced a superb guide for Barcelona so if you are visiting the capital of Catalonia or just interested in learning more about this magnificent city click here

A good guide of getting to and from the airports can be found here.

Everything you need to know about Poblenou