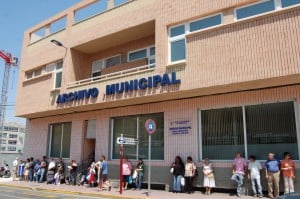 TORREVIEJA’S status as the Valencian Community’s fifth largest city received a further boost in January 2012, as within the last 12 months the city’s population has grown by 1,730, to a new high of 105,270 registered inhabitants. As has been the case for almost two decades, United Kingdom citizens are the largest International group, with 13,185 registered inhabitants, followed by the Germans 4,032, Russians 4,013 and Swedish with 3,107, who top the list of foreign countries in the census of Torrevieja. In January 2011 the number of citizens was 103,540 inhabitants.

According to the statistics of population and development of the Municipal Register of the City, the city of Torrevieja started 2012 with a total of 105,270 registered inhabitants, of which 53’1% are citizens of foreign origin (55,911 inhabitants), while 46’9% (49,359 inhabitants) are Spanish. It’s close in the battle of the sexes with the men coming out just on top with 50’6% (53,271) and 49’4% for the ladies (51,999). The data cements the city of Torrevieja as one of the most important in the region, and as the third city in terms of population of the province of Alicante and in Valencia fifth, just behind the three provincial capitals, Valencia, Alicante and Castellón and then Elche.

The population statistics reflect an increase in the number of European Union citizens who have decided to take up residence in Torrevieja, mainly citizens of the United Kingdom, Russia, Germany and Scandinavian countries, specifically from Sweden and Norway. The data also notes that since the year 2008 there is a slight decrease in registered voters of Hispanic origin, mainly from Colombia, Ecuador, Bolivia, Argentina, Peru and Chile.