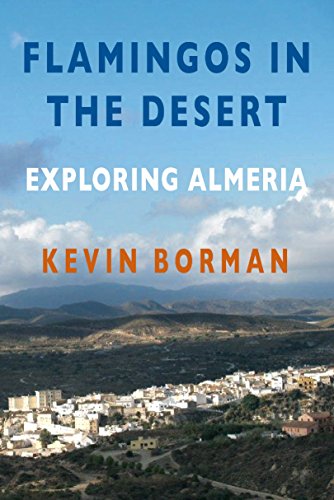 “Flamingos In The Desert – Exploring Almería”

‘Flamingos In The Desert – Exploring Almería’, which runs to over 300 pages and includes maps, a full index and a link to an online photo gallery, represents over four years work by English expat author Kevin Borman. The book aims to get under the skin of Almería province and reveal the hidden secrets of the area.

The author explains: “I’ve been intrigued by this area since first coming here nearly nine years ago. It’s superficially barren and bleak but once you look a bit closer, you find all kinds of fascinating features. The more I’ve explored – not just physically but by talking to lots of people and also by reading Spanish sources – the more I wanted to produce a book that would give English-speakers an insight into what really makes this little-known pocket of Andalucía tick. ”

From flamingos to earthquakes, iron ore mines to goats, wildfires to high-speed trains, and white villages to the sets of cinematic history, the book ranges widely. The author shares his reflections and understanding of landscapes, history, wildlife and culture on a journey from the Cabo de Gata-Níjar Natural Park to the Sorbas Gypsum Karst and far beyond. He says: “I hope everyone will find things of interest in this book. If you want to know about the reintroduction of loggerhead turtles, the history of the gold industry, the disused airfield near Turre, how to take your olives to the local olive mill or how to walk down the Río de Aguas from source to mouth, it’s all in here. There are floods, nuclear bombs, threshing circles, Moorish irrigation systems, and the iconic plants of the area such as agaves. Peter O’Toole, Sergio Leone, John Lennon and Jack Nicholson make brief appearances. There’s even a recipe for prickly pear jam.”

Since publication in 2014, Flamingos In The Desert has sold over 3,500 copies. Local resident and businesswoman Jackie Bragg, who runs Costa Almería Tours, describes it as: “The first book to get to the heart of Almería. This is a must-read for all residents and visitors.” Lindy Walsh, of the Urrá Field Centre near Sorbas, adds: “Really enjoying it…VERY readable…genuinely informative.”

Kevin Borman, a former geography teacher and writer from Sheffield who received an Award for Excellence from the Outdoor Writers’ Guild in 2003, says: “This is my ninth book but it’s my first about Spain and certainly my most ambitious. It’s been a lot of hard work but I’m delighted with how it’s turned out. I hope those who take the plunge and buy a copy enjoy it too.”

A substantial extract from the book can be seen on amazon. Flamingos In The Desert is available from amazon, from feedaread.com, from selected local outlets in Almería and also direct from the author. It is also available as an e-book for Kindle. 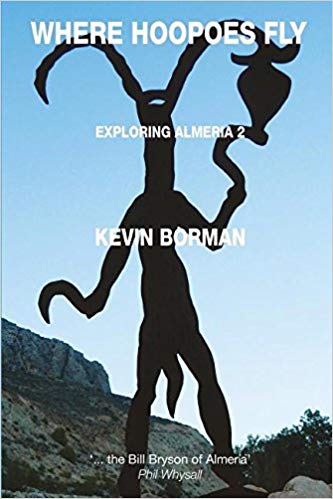 Following on from his best-selling 2014 book Flamingos in the Desert: Exploring Almería, Kevin Borman continues his explorations of the people, landscapes, history and curiosities of eastern Almería. Described by reader Phil Whysall as ‘…the Bill Bryson of Almería’, in Where Hoopoes Fly: Exploring Almería 2 author Kevin Borman travels the coast from Macenas to San Juan de los Terreros and follows the Río Almanzora from source to sea. He ventures from the Sierra María and the Sierra Almagrera to the badlands of the Tabernas Desert and up to Calar Alto in the high Filabres, follows the disused Bédar-Garrucha Mineral Railway, delves into the Moorish past and visits the sites of ancient cultures. Almería’s Civil War tunnels, traditional irrigation systems, the annual matanza, industrial greenhouses, books about the area, they are all here. Towns and villages are checked out too: Níjar, Cuevas del Almanzora, Villaricos, Sorbas, Vera, Serón, Arboleas, Purchena, Zurgena and more. Maps, a detailed index and an online photo gallery help the reader to ‘get under the skin’ of Almería.

Flamingos in the Desert brought feedback from hundreds of readers. For example: ‘Definitely the most informative and readable book of its genre which I have read.’ (Malcolm Kennedy, Algarve, Portugal). And: ‘I had two copies of your book delivered this morning by Amazon. After reading the first seven sections of your walk along the coast I feel that I should raise a complaint. I am sat at my desk at home and your book has really put paid to me doing any work today.’ (Paul Burt, Bath, UK). With Where Hoopoes Fly, Kevin Borman hopes to continue to please readers old and new who want to know more about this fascinating corner of Spain.