A recent study by the Washington Post ranks Spain as the world’s most tourism-friendly country in the World Economic Forum’s Travel and Tourism Competitiveness Index. It concluded that, “With approximately 60.6 million annual arrivals from international tourists, Spain tops the list for the first time. The country, rich in cultural resources and entertainment, ranked high in natural and cultural resources. It also scored high in infrastructure, travel and tourism policy and conditions, and business travel.” Obviously, these are pre-Covid statistics.

These 60 million visitors and the 45 million or more residents all need to get around the country. How? By most European standards, Spain is a BIG country and at some stage you are going to have to travel from A to Z. Unlike many travel guides, I am not going to say, “It’s easy and amazingly inexpensive to get from anywhere to everywhere”. It is not! Spain’s infrastructure varies between lamentable (public transport in rural areas) and excessive (too many empty airports!) with everything in between. Let’s be more realistic.

Car-Sharing. Despite opposition from taxi companies, regional authorities and even the government, Blabla is alive and well in Spain. You check on their site, see if anybody is offering a seat on the route you are going and book with the driver direct. I believe this is an aspect of travel that will increase massively in the next few years. Blabla is to car-sharing what Airbnb is to bed-nights.

One of the best ways to see Spain is by car. Fortunately, it is very easy and extremely good value to rent a car in Spain. Cars are available at all airports and most railway stations. “Obviously, the best way is to book in advance using a trusted and professional company – Discover Car Hire. You will usually have the option of diesel or unleaded, manual or automatic. Provide a valid driving licence and pay by card …. and away you go! With a rental car you can discover the parts of this fascinating country that attract you most. Stay an hour, a day or longer and explore the coasts, the mountains, the Meseta (Central Plateau). You choose where and how long you stay and with your hire car you are not reliant on plane, bus or train timetables. Enjoy!

Hitchhiking
Difficult – very difficult. Nothing else to say!

There is not a national fully-integrated long distance bus travel company. The nearest that Spain has is ALSA Coach Travel. I use them frequently and I find the services excellent, punctual and secure. What I do NOT like is their website. They have some excellent weekly/monthly tickets and other offers BUT there are often problems with their site or you have to go 50 kms to buy a ticket in person from their office for travel the next day! For example, they have/had (?) a one week pass for only 100 euros but, sadly, market it appallingly! The company is now owned by National Express and I hope improvements to their admin will be made. They do have excellent support in the English language ….. via Facebook!!

I would like to shout out for Megabus who I have heard described as the “Ryanair of coach travel.” Currently, they only connect Barcelona to the north of Europe but I am looking out for more routes in the future. Eurolines/Flixbus connects Spain to the rest of its European network but again its site leaves a lot to be desired. English speakers may be better checking the UK site. The French company iDBUS also have routes into Barcelona at great prices.

The national rail company is RENFE which covers the overwhelming majority of all rail journeys in Spain. Usually the services are fast, punctual and safe. Spain has one of the highest totals of high speed rail miles in the world. The challenge is that the route network is horribly thin and your journey may start a long way from any station. The RENFE site is in English but again be prepared for technical gremlins when booking. Prices vary from wallet sucking for immediate 1st class AVE (high speed) journeys to very reasonable, especially when they have special offers on.

A very exciting innovation is the introduction of competition. It started on the Barcelona – Madrid journey where train travel has again leapfrogged air as the most popular option for public transport and is spreading. RENFE has launched its own lo-cost alternative AVLO and the French SNCF subsidiary Ouigo and IrYo have also entered the market. This has led to fares as low as 7 seven euros (!) and a huge increase in numbers. After Madrid/Barcelona came budget options to/from Valencia, Tarragona, Girona etc Following on from the initial success there is “talk” of other routes opening soon. These include Malaga and Seville in Andalucia. This development has been well documented on YouTube (search AVLO) and in English you can get full details on the excellent The Man In Seat Sixty-One site.

Spain is a full member of the Interrail/EUrail network BUT BUT BUT be aware of obligatory paid seat reservations on many services. Please check in advance. The Man in Seat Sixty One has full details and Nicky Gardner & Susanne Kries Europe By Rail will also give inspiration. Another shout out for Tom Chesshyre’s easy-to-read but informative Slow Trains Around Spain . It would be nice to seem him add a sequel with a Fast Trains Around Spain as the AVE services are indeed excellent. He is one of my favourite travel writers and you may well also enjoy TICKET TO RIDE: Ticket to Ride: Around the world on 49 unusual train journeys, Slow Trains to Venice and Tales From The Fast Trains – Europe at 186MPH. All excellent. 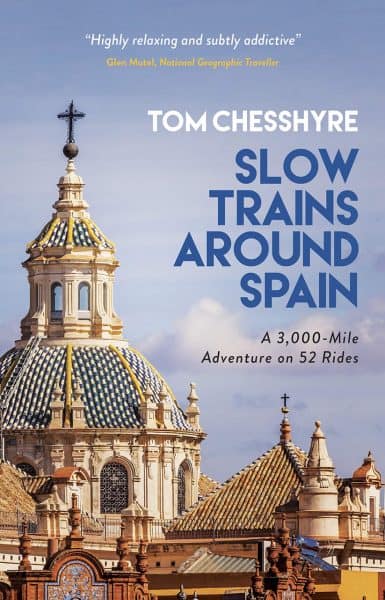 Incidentally for those interested in European rail travel, I can thoroughly recommend Tim Parks’ Italian Ways, on and off the rails from Milan to Palermo which was my inspiration to do a similar journey but without a travelogue. More recently Rory Moulton has written an excellent “Europe By Milk Run.” Moulton is a professional American writer who writes at Bryson-like speed about travel from The Netherlands through to Spain. First-time writer and first-time Interrailer has written a practical overview of Interrailing in I Hope There’s A Kettle In My Room.

Recently Trenes was launched to offer budget rail travel. I would recommend keeping an eye on that site. Some trains can even be booked through The Trainline

It goes without saying that a country which is highly reliant on travel has an extensive network of airports on the peninsula. In fact in the boom years of 2000-2010 (and with the benefit of EU money!) new airports and routes were launched at an amazing rate. Sadly this led to some white elephants/doubtful decisions at places like Ciudad Real, Castellon, Albacete, Huesca, Corvera and Leon. Iberia was the flag carrier and was attacked with ferocity by Ryanair, German Wings, Norwegian and numerous other airlines looking for a piece of the cake. Some succeeded in gaining customer share whilst others sadly folded. Iberia set up a joint-operation, low-cost airline, Vueling, which initially struggled to decide whether it was full-service or budget but seems to have overcome its original challenges. Fares within Europe are excellent value especially if it’s a point to point Ryanair or Wizz route. Fares from Madrid to South America are always competitive but I have always found other long-haul prices better via London or Northern Europe. Sites like Skyscanner give full details and prices.