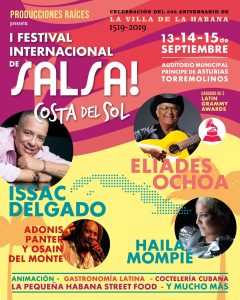 Calling all Lovers of Salsa and Latin rhythms!

The First International Salsa Festival of the Costa del Sol comes to Torremolinos!
A truly spectacular event that will see 4 of the most celebrated Latin artists share the stage in a unique show.

Over three days, you can enjoy an all-star line-up from the very heart of Havana, with headline artists:

From September 13th to 15th, the Torremolinos “Principe de Asturias Auditorium” will be the chosen venue for 3 days of great fun and loads of rhythm, You’ll also be able to find Salsa workshops for novices, Rumba workshops and at the same time, enjoy tasty Cuban treats and a Cuban cocktail bar.

Tickets can be purchased online from https://festivalinternacionalsalsacostadelsol.eventbrite.es/?aff=bigmpromotions

Issac Delgado – is one of the founders of “NG La Banda” and is a popular Salsa and Timba performer, In 1991 Delgado put together his own band and recorded the CD, Dando La Hora under the artistic direction of Gonzalo Rubalcaba. This album received the 1992 EGREM Prize. His second CD, Con Ganas, again with Rubalcaba, received two EGREM prizes in 1993Eliades Ochoa – is a Cuban guitarist and singer from Loma de la Avispa, He began playing the guitar when he was six and in 1978 he was invited to join Cuarteto Patria, He plays the Guitar, Tres and also a variant of the guitar, with two additional strings. His involvement with the Buena Vista Social Club and the Wim Wenders film of the same name (1999), has led him to worldwide fame.

Adonis y Osain del Monte – a Cuban group with many talents, combining the “Folk Culture” of some of Havana’s more colourful areas, with Rumba rhythms crossing into Afro drumbeats.

Haila Mompié or simply Haila, is a Cuban singer. She specializes in Son and Timba music, being the lead vocalist in the popular Azúcar Negra. She collaborated on “La Rumba Soy Yo”, a various artists rumba album that received the Latin Grammy Award for Best Folk Album in 2001. 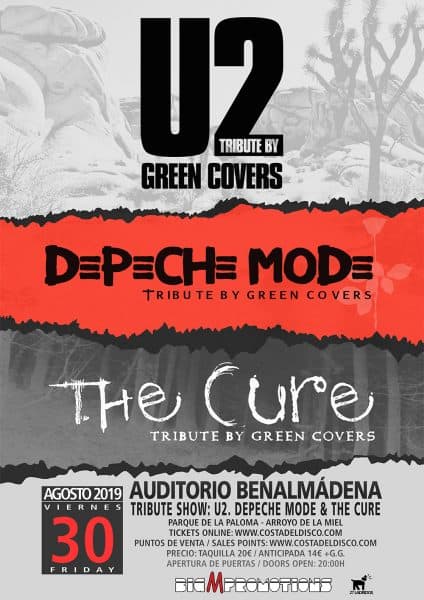 Triple Tribute Concert in Benalmádena!
The very best of 3 iconic bands LIVE in the coast’s favourite open air auditorium at the top of Parque la Paloma, and opposite Selwo Marina inArroyo de la Miel on Friday 30th August.
Currently on Tour in Spain The Green Covers 80’s tribute to U2, Depeche Mode and The Cure.
“Green Covers” authentically recreate the sounds of U2, Depeche Mode and The Cure. Using a combination of meticulously engineered effects with live sound, and stunning visual effects, resulting in a spectacular 3 hour show that leaves the audience dazzled!
The true sound of 3 iconic bands – U2 – Depeche Mode – The Cure in ONE outstanding concert!
Do NOT miss this one!!
There will be tasty HOT food served all evening, 2 bars and parking for 1000 cars is right next to the auditorium and is FREE!!