Barcelona encompasses 10 unique neighbourhoods which are locally referred to as barrios. Apart from its spellbinding fusion of history and modern fascinations, each of these barrios offer fantastic accommodation in Barcelona boutique hotels which mirror the vibrant art and cultural scene of their particular barrio.

The Gothic district or Barrio Gótico is the ‘old town’ centre and the origin of the entire city. Wonderful architecture and winding cobble-stoned street characterize this fascinating barrio. Located at the heart of Barcelona Gothic district, Grand Hotel Central reflects the rich cultural heritage of this central Barcelona neighbourhood. This ornate building is embedded in a neighbourhood that has witnessed Barcelona’s developments over hundreds of years. Right next door is the Cathedral of Barcelona and numerous sights are within an easy few minutes walking.

Over the last couple of years, one of the most attractive neighborhoods, Born, has flourished. There are numerous small boutiques, bars and restaurants that line its narrow alleyways and expansive plazas. Born also offers respite from the vibrant metropolitan life in the green Parc de la Ciutadella. One of the most popular retreats into natural surroundings, this park leaves the city far behind. This popular park is located on the site of the former citadel of Felipe V., in which Catalan nationalism was violently suppressed. Apart from small lake, wonderful spring fountain designed by Gaudi and FontserÁ¨, you can also find a zoo and the parliamentary building here. Just a block from the park, Hotel Chic & Basic Born is located on the leafy street Calle Princesa and mirrors the city’s extravagant styles in its delightful blend of minimalist design and colourful atmosphere.

If you want to explore the vivacious interior designs of Barcelona, then you should stay at the Derby Hotels of Jordi Clos. Located in the neighbourhoods of Les Corts and Barrio Gótico. This inspirational design and tasteful selection in works of art are also reflected in Hotel Grand Derby in Les Corts. The owner Jordi Clos is not a passionate art collector, he also works as an archaeologist and has returned with some real treasures from his archaeological digs. These findings along with Napoleonic engravings and Indian sculptures add to the arty ambiance at his hotel Claris G.L., which is conveniently located next to the Barrio Gótico, near Les Rambles, in a small, neoclassical palace. The sister hotel Grand Derby in the city’s central barrio Les Corts will delight aficionados of fine paintings with works by luminaries such as Picasso, TÁ pies, Dalí and Miró.

West of the city centre, the leafy residential Sant Gervasi barrio with narrow streets is a perfect vantage point from which to explore the city. Abac Hotel and Restaurant is a lovely oasis housed in a 19th century mansion. Staying in this soothing abode conceptualized by local star architect Antoni de Moragas, you have the best that the city has to offer along with an excellent restaurant and spa. Browse the barrio’s designer boutiques, indulge at local tapas bars and marvel at Antonio Gaudi’s architecture.
With its many facets and secrets, Barcelona remains one of the world’s most mysterious cities. You can never entirely grasp all of its details in one visit, which is what keeps visitors on returning for new explorations.

Guest post by Escapio.com, where these and many more luxury, boutique and design hotels in Barcelona and beyond can be booked with a best price guarantee. 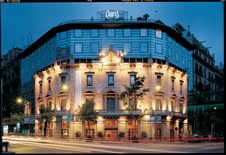