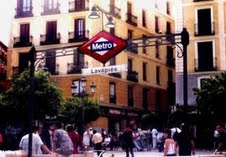 Lavapiés, a traditional borough in Madrid with a solid property market

If there is an area in the city of Madrid where Brits can get an authentic feeling of what the Spanish capital was like in the early 1900s, it is the borough of Lavapiés. Lavapiés is in the heart of Madrid. The borough, in Madrid’s city centre, is one of the most dynamic urban areas in the country. Since the renovation scheme which began in 1998, a total of 9,600 properties have already been renovated. The renovation process not only affects housing, but also urban aspects such as pedestrian paths, roads and parks.

Lavapiés has a growing property market, in contrast to the 1980s when the area reached a degradation level that threatened its survival as a populated zone. Nowadays, more than 50,000 people live in this historic borough and its future is secure. More than a third of its population are expats from other countries, which combines well with its traditional local residents. Life in Lavapiés is now as good as it was there in the 1970s.

One of the main problems of Lavapiés has been the sub-prime housing, with blocks of very small flats of 3 and 4 floors, without a lift, and even without windows. This problem is being tackled through the renovations of full blocks that are now equipped with lifts. A total of 88,500 million Euros has been injected into housing renovation in Lavapiés. Nevertheless, the subprime housing is still a challenge for Lavapiés in order to accommodate the growing demand for housing that the borough is experiencing.

Lavapiés is a borough with plenty of restaurants where tourists and locals can enjoy many sorts of national and overseas cuisines. Small businesses and local commerce are the cornerstones of the micro-economy of this borough. Bordering with Lavapiés, we find the boroughs of Embajadores, which, from an urban and architectural point of view, are similar, but historically have been split for administrative purposes.

Lavapiés has a growing property market in the heart of Madrid and is surrounded by an excellent transport network (underground, bus and taxi), as well as being within walking distance from the main train station: Atocha. The rental market in Lavapiés is lively both in the short and long term, since students from the University campus near to the borough, generate a permanent rental demand.

As with much property in Madrid, negotiating prices directly with the sellers through a property agency, could prove lucrative. Serious buyers looking to make a quick purchase, can get sizeable discounts.

A recently refurbished 2 bedroom flat on Calle Sombrerería, in a classic building (corrala) with traditional quadrangle and residential elevator, should cost about €122K. On Calle Argumosa, which is the most popular and expensive street in Lavapiés, a fully furnished 3 bedroom flat, should cost €133k. A 2 bedroom flat in Calle Buenavista will cost around €107K. It will be in good condition to move in to, although slight refurbishment could help to improve the rental price, if you are a buy-to-let investor.