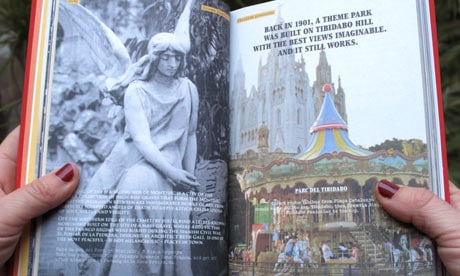 In a world of hand-held digital information, where utility is everything and art is an afterthought, the humble, papery travel guide is oft predicted an imminent, sticky end. Admirably, Le Cool seems not to care. Its beautifully produced city books are rarely handy. Neither do they sub-divide into useful district-by-district sections. There are a couple of maps in its new Barcelona guide, but they are all hand-drawn and relegated to the index. In fact, it could all be a little bit annoying, in kind of hipstery devil-may-care way, if the content wasn’t so consistently good.

Good luck to them. We’ve rifled through the latest guide for some of Barcelona’s best bits.

The typical Spanish breakfast consists of a cigarette and a shot of hot coffee – not necessarily the right treatment for a bruised stomach. For food to soak up last night’s leftovers, pay a visit to the Boqueria medicine men. The scrambled eggs at El Quim (stall 606) come with white sausage, foie gras, baby squid or pretty much any other animal-based ingredient you fancy. If you’re in a really bad state, order the tripe. Alternatively, have Joan at Pinotxo (stall 66) serve you a stew of chickpeas and black pudding, accompanied by a glass of cava. That’ll put you back on your feet in no time.

Els Encants is the bastard love child of an antiques shop in London and a car boot sale in Kabul. There has been talk about its relocation for years, but so far the crazy jumble of broken TV sets, dirty silverware, battered books and wooden picture frames remains in the anonymous no man’s land next to the Plaça de les Glòries. As at any flea market, you’ll have to dig your way through piles of junk in order to find the collectors’ items – and once you find your prize, be prepared to bargain hard with the old man on the other side of the blanket. Arrive early to grab the better items.

Don’t let the ramshackle interior at Casa Mari y Rufo (Freixures 11) distract you from the tastiness of the sirloin steak with foie gras, flambéd by Mari, Rufo, or their son, with an industrial blowtorch in the middle of a dining room packed with suited businessmen and construction workers. Nearby, the typical diner at Salvador (Agullers 18) is 50, male, and works at the trade union headquarters on Via Laietana. The typical waiter drinks beer for breakfast and shouts to be heard over the general racket. And the typical meal consists of chickpea stew followed by pig’s feet or veal chops. Because real men need real food.

One of the best trips outside the city is to take a car and drive all the way up to the very edge of Spain, the Cap de Creus nature reserve. First, visit Cadaqués, a remote fishing village of whitewashed houses that acquired fame in the 1970s as the centre of two artistic movements, one centred around Salvador Dalí and the other around Galeria Cadaqués, which attracted people such as Man Ray, Joseph Beuys and David Hockney. Stroll along the promenade and have an aperitif at one of the beach bars, then drive to neighbouring Port Lligat to visit Dalí’s former house. From there, follow the signs towards the easternmost and highest point of the cape, and lunch with breathtaking views at Restaurant Cap de Creus (+34 972 199 005 – call to reserve and request a table on the terrace by the window).

Courtesy of The Guardian