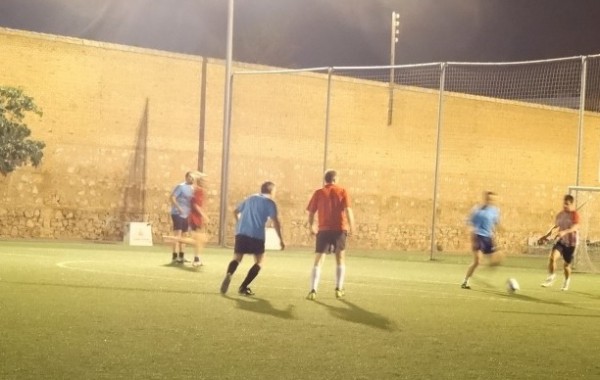 Well, here I am back in Valencia. I knew I would be back but did not know how quickly. After my great trip down to Archidona and Antequera to fulfill a commitment it was good to be back in the city.

When I was talking to Lodewijk Cuypers of Globexs a few days ago he told me about many aspects of the company. One which interested me was his international football team! Yes, Globexs boasts its own football team and he invited me to watch them in action. Anybody who knows Steve would know that he does not need to ask twice….especially when he offered me a room for a couple of nights! So at 9,30 on a Friday evening, I am roving reporter cum ball-boy at the superb Polideportivo Virgen el Carmen Beteró in the university district of Valencia. I found that this was something of a friendly/trial and it was a very internationl Globexs team all looking smart (if not fit!) in their light blue shirts playing against a wonderful mix of expats and local Spaniards. The “others” were in an variety of red shirts. Rory an Erasmus student from Exeter University was in a Manchester United shirt so he was clearly a man of taste. “Suarez” turned out to be Florian a Belgian expat who was more than useful despite his Liverpool shirt. Tragically “another person” was in an Arsenal shirt so I clearly wanted him to lose, score six own goals and, generally, be as useless as his heroes are. After the game, I found Clive was a really good guy who taught in a local Academy. Still misguided allegiance though!

The game itself was fairly end to en stuff but with a higher level of skill than I would have expected. This was 8-a-side on a big pitch with no hiding places! There was no lack of commitment but the tackles were fair and there was not a bad foul in the whole game. Some players, like Ward a Belgian who is fluent in Catalan, Spanish and about 37868 other languages, kept to their positions but it seemed that most other players swapped and changed with a goalscorer donning the keeper’s gloves 2 minutes later! Not that it really mattered too much but Globexs won 4-3 although if the game had gone on much longer, an equaliser was likely as they let in three late goals.

The tercer tiempo (Spanish football’s equivalent to the 19th hole) was in a local bar. This was a fantastic affair, with a little help from Lodewijk and Cedric, another Belgian (married to a Valencian lady), we worked out there were 12 nationalities on the pitch/in the bar….including a lone Canadian, Nenad. How did he get here? Anyway, Lodewijk went home happy, everybody had enjoyed themselves in a convivial international atmosphere ……and he had scored a magnificent header! 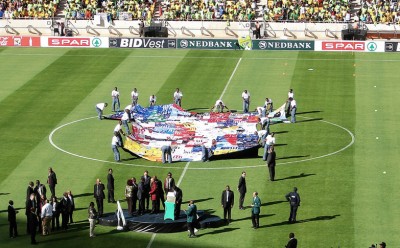 Talking about shirts, the conversation obviously moved on to Bjørn Heidenstrøm and The Shirt project. Bjørn cycled from Oslo to South Africa raising awareness for the UNHCR and collecting football shirts. The photo above shows the shirt (2000 shirts!) at the opening of The World Cup Final arena. 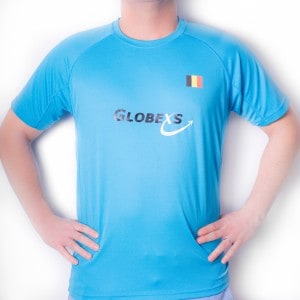 The Valencia CF shirt is there, presented by Unai Emery himself and now the Globexs shirt will be added …. to those of Italy, Finland, Man Utd, Liverpool, Roma, Barcelona etc. Thanks! If anybody wants one they are available in the new Globexs web-shop. 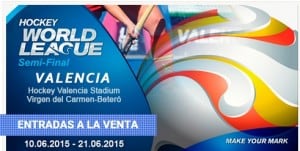 Whilst the guys were changing, I had a chance to look around the sports’ centre. It is really hugely impressive and I was not surprised to see that it is to host the Hockey World League Semi-Final for women in June. It had previously hosted the event and I could see that it would be a great venue. Make a date 10 -21 June 2015. Details on the Spanish hockey federation website. Confusingly, the leaflet which was all in Spanish had three words in English. “Make your Mark” Mmmm! Obviously, if you decide to come and need accommodation in Valencia then Globexs can help.

By now, it’s 1am and I’m tired so was delighted to be shown my “home” during my stay. Oh my word! Niiiiiice!
Cuba 2 is a brilliant penthouse in Ruzafa with a terrace and 2 bedrooms. This would be my dream apartment to rent for a short (or long!)stay. Right in the heart of the best/my favourite neighbourhood of Valencia, Ruzafa. It’s surrounded by lots of restaurants, shops, markets and less than 10 minutes’ walk to the city centre, to the Jardín de Turia, the railways station …… and 15/20 minutes to Valencia’s ground, the Mestalla. (Watch this space!)

The penthouse terrace is amazing and offers great views over the city and beyond. I spent ten minutes in the dark picking out many of the places I had got to know. There are 2 bedrooms, one with double bed and the other with two single beds. There are 2 bathrooms, a full kitchen (wasted on me!) and a spacious, airy living room with direct access to the terrace. It’s got great wifi! Thanks, Globexs!