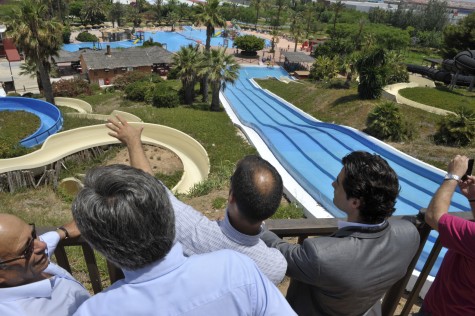 Few of us lived in Torrevieja 25-years ago when Aquopolis was first built and Residential Tourism slowly crept into the City. One of those who did and still does, since he was just entering his teens at the time, is Torrevieja’s mayor, Eduardo Dolon, who accompanied by the Director of the División de Acuáticos de Parques Reunidos, inaugurated the new season at Torrevieja’s Water park, Aquopolis, last week. Eduardo Dolon highlighted the importance of tourism at the park for the city, and said that it is one of the most sought after tourist attractions for the thousands of visitors to Torrevieja each summer. He also noted that about 80% of customers are tourists or residents of foreign origin, mainly British, Irish, Scandinavian and Russian. The mayor also thanked Enrique Pérez for their unconditional support for Torrevieja, which has become one of the most important parks for Parques Reunidos and the fact they are committed to increasing its facilities to people with disabilities. This year, they have built new wheelchair accessible shower facilities, together with access ramps to certain pools and amphibian seats.

Agreements have also been signed to work with the Department of Commerce and Hotel Association and APYMECO (Association of Small and Medium Business) so that merchants can offer their customers various deals to enjoy the aquatic setting. Aquopolis also participate in the campaign “Torrevieja, open on Saturday.” The water park joins this party with street games for children of three to twelve years. Events will take place on Saturday 16 June and July 7 and 21 from 18:00 to 21:00. The park also has a collaboration with the Department of Sports, offering special discounts for registered Torrevieja Sports and athletes, and with Iker Casillas Football Campus “City of Torrevieja”. During these 25 years the site has continued to improve its facilities. In the past eight seasons they have invested more than €2,800,000 and created over 100 jobs each new season.

This year the park has installed a new area for activities such as Yoga, Step and Pilates. The park has a new chill out zone, where parents can escape from their children for a while, and relax in the knowledge that the park staff are keeping a watchful eye on what is going on at times. The park has a Mini-Club, for small children, in a specially adapted area, where they can play, paint and interact with other children. The Park is open through September, at the moment until 6.00pm, going to 6.30pm in July and until 7.00pm in August. Details of special offers, opening hours and all pricing can be found on their web site