GlowMark´s clever technology absorbs the energy it requires to charge and power it from being exposed to ambient light sources both in-doors and out-doors.

After only 8 minutes of exposure to ambient light the marker has harvested and stored enough energy within a specially formulated compound that will enable it to glow in the dark and which can be clearly seen for a total of 48 hours. This is more than enough time to keep them activated from dusk until dawn.

The GlowMark safety markers will therefore glow for more than enough hours required in the event of a power failure or to see them throughout the night and hours of darkness in both external and internal locations of all buildings and structures. GlowMark products can also be used and installed in publicly populated areas in towns and cities. Our safety markers are also ideal for use in all rural areas outside of towns and cities which may have no electricity or lighting.

The glow in the dark safety markers are visible in both low lit areas as well as in total darkness providing a visibly distinctive green glow from up to 20 meters range by a strategic lineal placement of them to guide people in the right direction along all areas traversed by humans, these include walkways, pathways and roads etc. 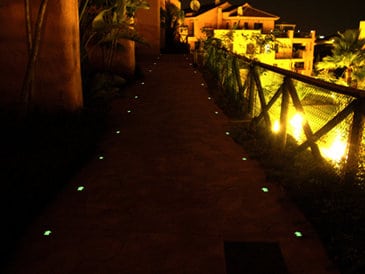 GlowMark markers are guaranteed to work because they are always active all the time they are exposed to an ambient light source in-doors and out-doors, therefore in the event of a power cut or low light or darkness GlowMark technology is ensuring a failsafe emergency back up as well as being an alternative lighting method which can be purchased and installed at a very low and affordable cost.  This will be achieved because all the time the lights are on in a building GlowMark will be charging ready for use immediately as soon as the lights go off.

The main advantage of installing our markers in Private & Commercial buildings as well as in industrial installations where high safety levels are paramount to human safety, their simple and cost effective installation will enable faster and more visible effective markings that will assist evacuees when exiting, as well as valuable time that will be saved when first response teams, fire fighters &  police have to enter the building to identify, asses and contain the area that is the start point and cause of the fire or incident.

GlowMark glow in the dark products are fire retardant and can be seen through smoke, therefore their use for marking emergency evacuation fire exits within all buildings and structures is invaluable because it will greatly reduce the risks of any additional accidents that are usually caused by people tripping over because they cannot see where they are going. Time also plays an important part in a structural evacuation and which is also a potential life saving advantage of using and installing these specially designed markers. Time can also save costly equipment from being damaged which is a beneficial cost saving as well.

1) Fire alarm points
2) Fire hoses
3) Fire extinguishers
4) Corridors and all walking areas
5) Fire exit doors leading to
6) Stairways
7) Handrails
8) Room numbering and contents identification
9) Low level tactical markings for fire fighters who crawl to avoid heat and smoke
10) Clear Identification to fire-fighters who can identify dangerous potential hazards such as flammable liquids or gases by using the 5 colours base rim coding to rapidly identify and prioritise flammable liquids or gases which may be present. 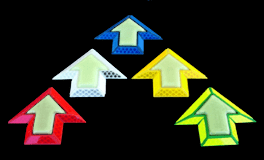 The 5 colour coding system can also be used for identifying many other areas and items in buildings and structures, institutions and public areas where indexing is used to identify.
Please note: Our Tactical Matrix system will effectively tactically tag mark all of these areas for the additional benefit of fire fighters, police and first response teams as well as incident evacuees and the general public!

This glow in the dark alternative lighting method does not require any maintenance and it does not suffer from component failures that can occur with higher costing electric, LED & Battery powered lights.  These highly effective glows in the dark markers are 100% self sustainable because they are free from the use of electrical power and batteries which support conventional emergency exit lighting and signage systems.

2) Simple & easy to install with semi-permanent or permanent fixing

6) Visible through smoke and fog

9) No component failures or replacements

10) Guaranteed to work for 5 yrs but in real practice they will work for 10 years or longer. 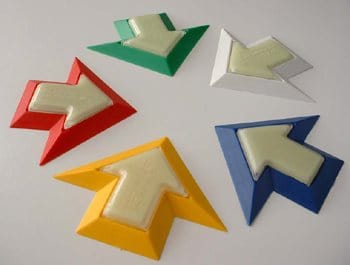 Usage of this glow in the dark safety product range will additionally save companies big percentages of money on the initial purchase costs as opposed to higher purchase costs of conventional lighting and Led systems, however the longevity of GlowMark’s use creates a massive ROI (return on investment) with beneficial ongoing cost savings.

Further cost savings can easily be achieved by enabling companies to reduce the usage of much higher costing conventional electric lighting methods ; and which are continuing to rise with annual inflation costs and charges. Because GlowMark does not require any regular maintenance, component replacements or servicing at regular intervals there are also no further costs involved.

Recent survey studies show the UK government will be increasing electricity charges by a further 8% increase over the coming months and in some areas of the European Union we can expect to see increases of up to 12% taking place.
By reducing current energy consumption levels you will effectively be saving big amounts of money on annually increasing charges, recent survey shows this is now important for the majority of companies and organisations in today’s economic climate.

Many companies and large organisations are now heavily focused on sustainability because firstly they want to create better economic levels within their company to save on annual budgets. And secondly many organisations are also now focused on the green initiative in an effort to improve their public image by being more environmentally conscious and ethically responsible. Using GlowMark also enables carbon footprint reduction.

We believe that simply using GlowMark glow in the dark tactical safety markers, they are an important must have product that are providing a necessary step in the right direction by increasing higher visual safety levels for everyone.

There is No light bulb filament or LED unit that lasts that long before it needs to be replaced maintained or serviced. ©