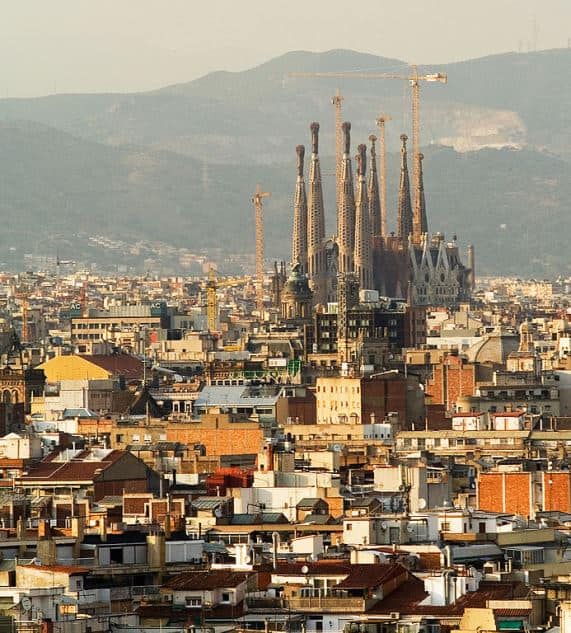 Photo courtesy of Short Stay Catalonia The view from Montjuic.

Though it’s full name is El Templo Expiatorio de la Sagrada Familia (The Expiatory Temple of the Holy Family), this building is simply known as the Sagrada Familia, a basilica designed by the Catalan architect Antoni Gaudí i Cornet. It is one of the most famous works by the artist and is the most iconic and visited monument in Barcelona. The monument regularly attracts more visitors than any other attraction in Spain, including the Prado Museum in Madrid and the Alhambra in Granada.

Work on this project began in 1882 and it’s still not complete today! The buidling actually started without Gaudí being part of the project, though he joined a year in and made a complete overhaul of the design.

The original idea of the Sagrada Familia came from a bookseller called Josep Maria Bocabella. He funded the project, taken on by Francisco de Paula de Villar y Lozano who proposed a replica of the Basilica della Santa Casa in Loreto, Italy. After some disputes during the project though, Bocabella eventually offered the project to his assistant at the time, Antoni Gaudí, who dedicated the rest of his life to the project. He famously said when questioned about the speed of the project “My client is not in a hurry…”. He passed away having only completed the front façade and one of the towers.

Barcelona is one of the most requested tourist destinations in Spain and the Sagrada Familia one of the most visited buildings.But it’s not all the city has to offer. There are beaches, hikes, historical buildings, and endless museums. Barcelona has something for everyone, so whatever it is you’re looking for in a weekend break, you’re bound to find it.