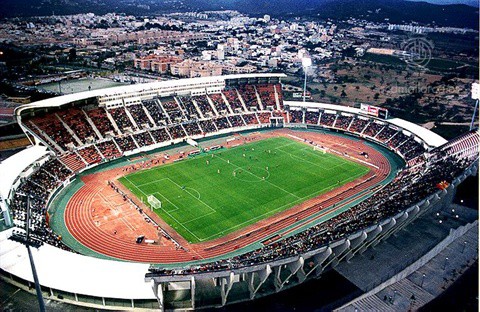 To quote their full title: Real Club Deportivo Mallorca, S.A.D. was founded on 5 March 1916 and currently plays in the Spanish second division after finishing 18th in La Liga in 2012/2013 which meant automatic relegation. The first season back in La Segunda was disappointing and so they must aim for promotion again this season.

Mallorca play in red shirts and black shorts with black socks. Their home stadium is the Iberostar Stadium (photo above), seating 23,142 spectators. This was previously called the ONO Estadi and before that the Son Moix. In its history, the team has spent 27 seasons in Primera División, 33 in Segunda División, 2 in Segunda División B and even 11 in the Tercera División which is the fourth level of Spanish football.

Real Mallorca have been having a lot of behind the scenes problems over the last five years with prospective buyers for the team coming and going amid newspaper headlines heralding the new saviour only to be disappointed at the last minute. It was announced on 22 July 2008, that 96% of the club’s shares had been purchased for over GBP 50 million by controversial English businessman Paul Davidson. In November 2008 it was revealed that Davidson was unable to complete the deal due to lack of finances, raising questions as to whether his interest was little more than a publicity stunt. Since then there has been a succession of managers and presidents!

Most goals scored in a season

Most League goals in a season