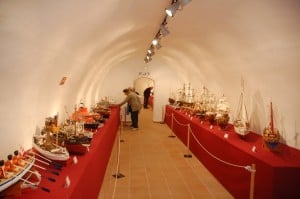 The X Exposición de Modelismo Naval Estático y Radiocontrol “Ciudad de Torrevieja”, or Exhibition of Model and Radio Controlled Boats is now underway. A superb exhibition of model boats are on display in the Sala de los Aljibes in the Parque de las Naciones; Park of Nations, while on weekends those with radio controlled boats show off their skills on the water.

The exhibition is organised by the Museo del Mar y de la Sal de Torrevieja in conjunction with the Asociación de Modelismo Naval “Pascual Flores”, which was created back in 2006. The club has over 100 members from ages 8 to 80 with members from Spain, UK, Ireland, Scandinavia and Germany, to name but a few. Over the years the show has attracted more than two hundred thousand visitors, featured 782 model makers, 1,567 models and involved 118 clubs and associations, not including this year’s event.

The exhibition is open from 9:30am to 1:30pm and in the evenings from 5:00 pm to 8:00pm. Admission is free to view the displays. Members and the public show off their skills on the water over weekend mornings and everyone is invited to bring down their own boat if they have one. Everyone takes a ‘frequency’ number from a special board to ensure that two boats are not running on the same frequency, obviously leading to a loss of control.
On display and on the water are a variety of different models including in the exhibition, model kits, salt boats, carved wood, ancient, military, 16th century galleons and even classic cruise liners. On the water you may see the Titanic, war ships, ferries, tug boats, water bikes plus speed boats zipping their way around the lakes. It truly is a morning out for all the family and well worth a visit.