Why You should be Investing and Living in Málaga Capital.

There is a lot of excitement about the opening of the new Pompidou Centre Málaga this week. Businesses have snapped up all the premises around the area in anticipation of the visitors who will be flocking to visit Málaga’s latest arrival.

The Málaga City Hall has provided an iconic building known as “El Cubo” (“the Cube”), located on the harbour (Quay no. 1), as the home for the Centre Pompidou in Málaga Capital.

The new museum opened its doors on Saturday 28th March 2015. The start of the Semana Santa holiday week.

A study by the organisation which runs Málaga’s commercial port zone, Muelle Uno, predicts that almost a million more visitors will visit the area in the period between the inauguration of the Pompidou Centre. It expects that the number of visitors to Muelle Uno will rise by thirteen percent in 2015, to 7.8 million.

Needless to say, this has also lead to an influx in investors. As Málaga’s popularity continues to soar, so will its property prices.

There is no better time than the present to invest in Málaga! 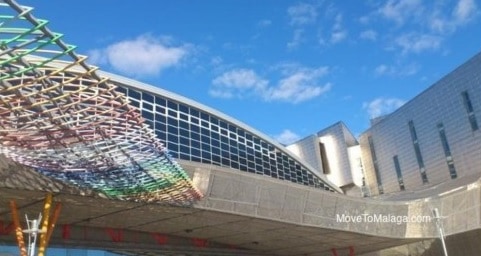 Not only is Málaga a great place to invest, it is a wonderful place to live.

If you are looking for a more authentic Spanish lifestyle than what is generally on offer on the Costa del Sol, I suggest you consider the City of Málaga.

Málaga is a place full of beautiful, friendly people, enjoying life at their own pace. It’s a city full of character, history, passion. Málaga invites outsiders with open arms. Food and drink to suit all pallets. Authentic tapas in tucked away bars, gourmet tapas and fine dining served to the highest standard and not forgetting the fresh fish cooked chargrilled in fishing boats on the many beaches.

Málaga is a paradise for individuals, couples and families looking for a coastal location with all the added extras of a bustling yet laid-back city.

“Ciudad del Paraíso” – the Paradise City. This is how the Nobel Prize winner for literature, Vicente Aleixandre, described Málaga. A city that vibrates with life and fascinates with its mixture of ancient history, folklore and modern culture. It is easy to imagine paradise in this harbour city that enjoys almost 3,000 hours of sunshine a year and several kilometres of beach right in the centre. 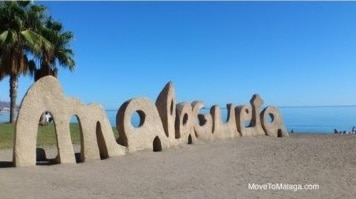 Málaga is a city with beautiful beaches: there are 15 beaches within Málaga city limits. Being a coastal city, a beach is never far. Málaga’s beaches are not your typical tourist beaches, with row after row of sunbeds for rent, packed full of over exposed foreign bodies. In fact, you’ll be hard pressed to hear anything other than Spanish being spoken on them. The chiringuitos (beach restaurants) are a great place to enjoy freshly fried local fish (pescaíto fríto) or a refreshing drink.

Muelle Uno is a Modern Contrast to the historical City: At the end of 2011 the long-awaited Muelle Uno was opened. It offers 14,000m2 of waterfront restaurants, shops and eateries. It has underground parking for over 1000 cars. The most exclusive part of the port, it is home to Málaga’s only Michelin-starred restaurant (Jose Carlos Garcia’s). This stunning addition to Málaga’s coastline is a haven for people looking for a taste of exclusivity or merely a stroll along the promenade in the sunshine.

Málaga is a city decorated with history: The City is proud of its History

Málaga is not a concrete jungle, it boasts natural areas and green leafy walkways:

The Districts of Málaga City 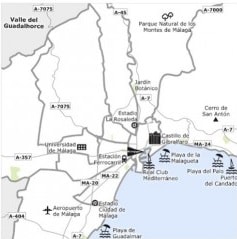 Málaga is divided into 11 Districts. The above image shows the districts of the city of Málaga.

From personal experience, the 3 most popular areas chosen by people moving to Málaga, looking for a permanent residence and for investment are Centro, Este and Carretera de Cádiz.

If you are considering investing in Málaga or moving over, simply contact me and I will make the whole process a lot easier and enjoyable.