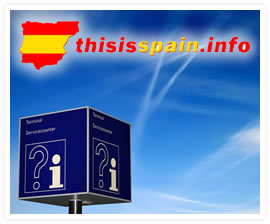 Lucena, for me, has always been a bit of a non-entity. Brilliant if you’re furniture hunting, which in August, September and October of 2007 I was doing nothing BUT furniture hunting, but aside from that, it’s like a drive through industrial estate with absolutely nothing preposessing about it at all. It’s known to be one of the best places for furniture as it happens as they manufacture pine furniture here “in crudo” which means untreated in any way – so you can shop from one industrial unit to another and sometimes make savings of nearly 100â‚¬ between the first shop you went into and the last.

But to leave Lucena there would be a bit like saying “The Queen wears glasses and, well, she went grey” …

First of all, where is it? (Yes, all links open in separate windows so click around freely” … Well, it’s here. It takes about half an hour to drive from my B&B Guest House to Lucena via Rute – you can clearly see Iznájar lake on the map too and get an idea of how huge it is!

Well. If you simply drive from us to Lucena, you’ll encounter what I encountered – main roads and industrial units. But if you grab the Spanish Bull by the horns so to speak, and turn left with a willingness to get lost inside the winding streets of Lucena itself, you have a completely different, beautiful, and very Spanish experience.

The tradition of Fiesta parades in Spain, especially in Andalucia, is strong in Lucena too. Searching around on Google I have found some amazing images of some of the many effigies that are carried by up to 30 people they are so heavy :

And my lovely friend Bat who is a good restaurant fiend, and a master at sniffing out the most perfect places for a lovely Sunday lunch followed by whopping Cuban cigars and a glass of Cointreau on the rocks stumbled across a rather amazing restaurant the other day known only by a sign outside saying 1886 – but it looks rather lovely to me … Comfy outside seats, and brasiers keeping the courtyard cozy all year round ….

There’s also great shopping I discovered – from malls which you really do have to stumble across to the most gorgeous “right up my street” boutiques that sell everything from figurines for 17â‚¬ (which you’d have to pay 250â‚¬ for anywhere else to clothes for 1â‚¬ right up to hundreds ….

And of course because it’s Spain, there’s a lovely warm and friendly atmosphere – once you’ve managed to park your car – that was the single trickiest thing for us – so I would suggest following the Blue P signs and getting into a proper carpark rather than trying to wiggle into on street parking and then discovering you’re in a loading only bay!

Semana Santa (Easter) is celebrated Spain wide – the processions start on Holy Monday and continue through to Easter Saturday.

Fiesta Aracelitana – this happens on the First Sunday of May in honour of the Virgin of Araceli, the patron saint of Luncena and the Andalucian countryside. A lively procession parades through the streets and the fiesta has actually been declared a National Tourist Attraction in Andalucia! We’re going this year.