Markus K has been a passionate musician all his life, but he has never been able to make a living from it, even with 3 recording deals and 10 highly acclaimed albums under his belt. “Expenses were always higher than the money I made, so I had to support my passion with a ‘real job’, in my case translation work”.

At the start of 2014, he vowed to change this. How?
By Taking His Music to the Streets!
Don’t expect a guy with an acoustic guitar. He is doing it in style. He uses a Korg Wavedrum and a JamMan looper to support his guitar and voice and bring his songs to life in ‘full technicolor’. 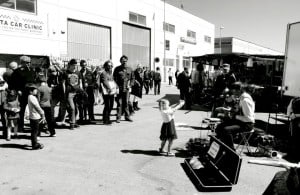 Drawing an audience on the street
The response has been spectacular, both from passers-by and the media. He sells CDs on the street, and everyone who tips him receives a little card with his website address and the option to subscribe to his blog. People who join the blog receive a free download of one of his best songs. All performances are recorded, straight to his laptop. The best performances are edited for inclusion on his next solo album.”

I am very much enjoying the experience of playing on the street. It is the most immediate connection with potential friends and fans, and it also gets the best performances out of me”, says Markus K.

With the help of Patreon, where fans can donate towards petrol costs, he plans to tour Europe. “I want to busk in Rome, at The Eiffel Tower, in front of the Big Ben and on Amsterdam canals”, he explains. “Everything will be filmed and published as blogs and vlogs, so friends and friends can follow it all online. I want to give an intimate insight into the challenges and rewards of playing on the street.”

Would you like to have his videos and blog posts sent directly to your inbox?
Visit the website to register, and you will also receive a free download of the song that is earmarked for his first solo single