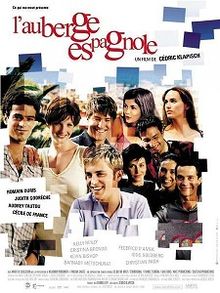 This is technically NOT a Spanish film but rather a French film set in Barcelona. I actually saw it in France on my journey down to Spain. Perhaps for that reason, I remember it so well. (In English-speaking countries it was released as “Pot Luck” or “The Spanish Apartment”. In Spanish it was “Una casa de locos”

The plot is fairly simple and is a nice “feel good” film. Why I think it deserves adding to this site is some superb photography in and around Barcelona.

According to Wikipedia:”The story follows Xavier (Romain Duris), a 24 year old Frenchman, who leaves his girlfriend (Audrey Tautou) and his country for the ERASMUS programme in Barcelona, a prerequisite for a job with the French government. On the flight over, he meets a young “uncool” French couple who let him stay in their flat while he searches for a place to stay. Xavier manages to find an apartment with other people from all around Europe, including England, Belgium, Spain, Italy, Germany, and Denmark with whom he becomes good friends. His girlfriend visits him but leaves sad. Xavier eventually has an affair with the wife (Anne-Sophie) of the French neurologist with whom he has been showing the city. One of his roommates, Wendy from London has a visiting brother named William who is quite abrasive and rude, resulting in some funny dialogues. Xavier’s girlfriend has an affair and breaks up with him over the telephone. Xavier becomes somewhat depressed and asks his friend the neurologist for help. Anne-Sophie tells her husband about the affair and he tells Xavier not to see his wife again. Then Wendy has an affair with an American, but her boyfriend Alister makes a surprise visit and William pretends that the American is actually his lover. At the end of the film, Xavier returns to Paris and gets the job at the Ministry but runs away on his first day at work and becomes a writer.”

So, nothing Oscar-winning but if you like Barcelona and or you are interested in languages, you’ll probably enjoy this film. (In its original it was shot in French but with a good amount of Spanish and English with liberal dollops of Catalan, Italian and Danish) The film was shot with a digital camera and is highly respected in video-photographic circles. Take it at whatever level you like ….but enjoy!