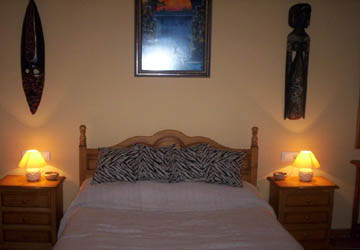 Hotel Casa Bob is a small, friendly guesthouse in the quiet Spanish village of Cuevas de San Marcos, Málaga. It is equidistant from Málaga city, Málaga-Costa del Sol and Granada Airports (ca 1 hour). It is a fully-licensed pension so, of course, is fitted with all of the emergency lighting, fire extinguishers, an intercom for the front door on all floors, telephone and tv points on all floors. For health reasons and no other, the owners are reluctantly putting the property on the market with immediate effect. The target price is only 199,000 euros for a quick sale. The owners would even consider a part-exchange for a smaller property on the Costa del Sol. I trust the owners implicitly – you can either make direct contact or use the form below and I will progress.

Some of the bedrooms offer en suite facilities others offer shared bathrooms. There are even a couple of family rooms so you do not have to be separated from the children. In total it has 8 bedrooms, 2 of which are en-suite, a very large fully fitted kitchen, an office, a lounge/diner/bar, a second lounge/bar, two terraces one of which has a hot tub which is brilliant to relax in on both hot and cooler days. There are two further bathrooms. As mentioned above, it is a fully-licensed property and is NOT just another villa that the owners are trying to fund with holiday lets. It is a working guesthouse with all paperwork in place. The new owners could, of course, simply use it as a delightful and spacious family home.

It is close to the Iznajar lake and makes an excellent base for visiting the region, enjoying the sights of Andalucia, or relaxing in the beautiful Spanish countryside. It is situated an hour north of Málaga whilst the cities of Granada, Seville and Cordoba are all within two hours’ drive.

It also has the Sierra Subbetica natural park on its doorstep as well as El Torcal natural park.  Antequera Golf is 20 minutes by car. The Sierra Nevadas and the beautiul Alpurrjara valley are about an hour’s drive . Bob and Nina, the owners, would be happy to help organise a range of activities for you.

Cuevas de San Marcos has many inviting taverns to slip into for a drink or tapas and the village has a newly-built municipal swimming pool that is open during the summer months.

However you spend your time here, we can be certain that you will not want to leave.

Cuevas De San Marcos is a typical Andalucian farm-town situated in the north-eastern corner of the province of Málaga, bordering with the province of Córdoba. It spills down the side of hill underneath the Sierra de Malhombre mountain with views out across extensive olive groves. There are many shops and bars along with a market, which is held every Saturday morning. There are two excellent public swimming pools, which are open in the summer months.

The town is very Spanish with many little squares to relax and bars and restaurants to while away the day in. However the town is only 1 hour’s drive from Málaga and Granada Airports and resorts such as Torremolinos. It is also just one hour’s drive to the skiing resort of the Sierra Nevada. The large towns of Antequera and Lucena are only 20 minutes’ drive away, and have large hypermarkets for shopping. Antequera boasts the nearest golf course.

The Iznájar Dam is certainly the most prominent landmark in the area. Most of the reservoir itself is in the Córdoba province but the dam itself is quite close to the town of Cuevas De San Marcos. Many townspeople come here on weekends to swim and picnic in the beautiful fresh water landscape. It is a popular spot with local fishermen as well.

The Camorro Mountain Range is another local landmark although the highest peaks here do not reach a thousand meters above sea level. This means the weather in the summer is hot, usually reaching a constant forty degrees plus during the day in August but rarely ever getting down to freezing at night during the winter.

Above the village you can visit the famous Belda Cave, by walking up the forested hillside above the village. The interior of the cave is made up of stalagmites and stalactites and three large interior lakes with one of the biggest bat colonies in Europe inhabiting this cave. On the peak of the Camorras there is the remains of the medieval town of Recca, now an important archaeological site.

There are plenty of ferias and carnivals throughout the year in Cuevas De San Marcos. The main one takes place in August when friends and families from near and far get together to enjoy several days and nights of music and dancing in the streets. Another important festive event is Las Candelas, taking place on the night of December 7th, in which choral groups sing around bonfires and candles are lit in the streets. This festival is celebrated at the same time in the other towns and villages in the Axarquia region, as is the festival of the Virgen del Carmen on July 16th. Holy Week is an important festive time too  with processions on Holy Thursday, Good Friday and Easter Sunday. The festival in honour of the towns patron saint, San Marcos, takes place on April 25th.

For serving members, families and ex-members of the Armed Forces, Bob and Nina are please to offer a 15% discount on the price of accommodation at the hotel. 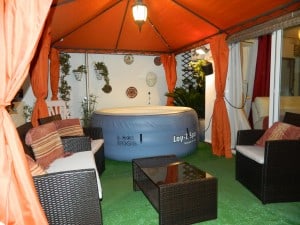