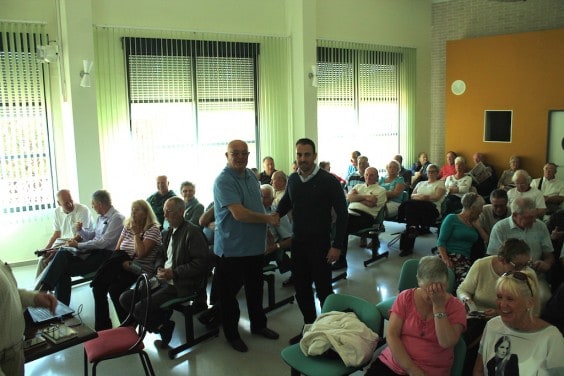 Having already reached acclaim by sharing help and advice about driving in Spain to their many thousands of followers on Facebook, the administrators of the page have also been giving talks to various associations in order to answer some of the most pressing questions that occur.

Recently, N332 gave a presentation to ARPO, the association of retired police officers, who met in the municipal building of Quesada, and were treated to an hour long talk given by Francisco Morales, spokesperson for the N332 Facebook group and Traffic Police Officer posted in Torrevieja. Accompanied by a variety of pictures and videos, the audience were given visual representations of such topics as carrying bikes, parking, overtaking, licensing and more, including the topic that brought a sigh of hope, how to drive on roundabouts.

There is no doubt that the presentation revealed a lot of unknown elements of Spanish driving laws, but more importantly reinforced the importance of researching the various rules relating to driving, many of which are similar to those in the UK, but many others that differ, some only slightly but others quite significantly.
Future talks are now being arranged in collaboration with Orihuela town hall and the Royal British Legion, with many other associations expressing an interest too.

There is no doubt that by reaching out to these groups not only provides the vital information about driving, but also shows the Guardia Civil officers in a somewhat different light, as an approachable and informative body willing to try to solve many problems about driving in a theoretical manner before having to deal with them on the roadside.