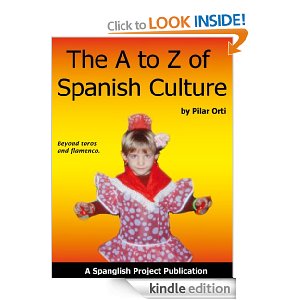 The A to Z of Spanish Culture by Pilar Orti.

Planning on visiting Spain? Or maybe you are just interested in finding out what Spanish society is like, how its history, traditions, art and politics have made the country what it is today.

If any of the above apply to you, you will enjoy “The A to Z of Spanish Culture”, as you compare how many of the Spanish stereotypes are really a part of Spain today.

The author Pilar Ortí was born and bred in Spain. She grew up in a society trying to figure out how to adapt to its new found freedom and how best to join the rest of Europe. Having lived in London now for over twenty years (time flies!), Pilar has written this “A to Z of Spanish Culture” with plenty of perspective, a bit of nostalgia and above all, a desire to demystify a country that is still represented abroad by toros and flamenco.

This light book about Spain is divided into different chapters, each headed by a Spanish word that opens up a whole aspect of Spanish culture: Spain’s history, its society, traditions, art, gastronomy or language.

As you read this book, you will have a much better idea of what Spain is like today. From grape-eating on New Year’s Eve to the re-enactment of 13th century battles; from the failed military coup in the 80’s to the recent fall from grace of the King; from the origin of the fideua (the pasta-based version of paella) to the origin of the popular tapas, “The A to Z of Spanish Culture” will get you closer to Spain today.

When you hear the word “España”, you will never think of flamenco dancers again.

A light read that will dispel many myths about Spain and get you that little bit closer to the country’s society, history, literature and gastronomy. Available as paperback and e-book through Amazon