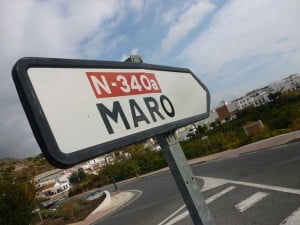 The village of Maro is located in the Axarquia region of Andalusia and lies on the border of the Costa del Sol and Costa Tropical. It’s a tiny, sleepy little village with approximately 700 registered inhabitants which, despite being on the coast retains a great deal of the rural way of life that is historically found in the region. It lies within the Municipality of Nerja and despite having it’s own Mayor is largely administered by its larger neighbour. The village of Maro is in somewhat of a blessed location with the nearby Nerja Caves being found a short walk from the village centre, one of Andalusia’s best beaches, Maro beach, also being found here and two natural parks, one coastal and mountainous right on the doorstep. The little village also has two historical monuments that of the restored Maro watchtower and Eagle Aqueduct a short walk from the beautiful village square where you’ll find the pretty white walled chapel of the Virgen de las Maravillas.

The village despite being small each year organizes an number of fiestas some of which are regional although some are just for Maro itself. Here’s the traditional events program.