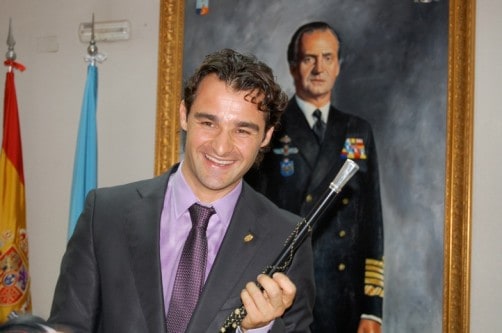 EDUARDO DOLON has just finished his first year as Torrevieja’s Mayor. He had big shoes to fill, having taken over the roll from Pedro Hernandez Mateo, who held the post for over twenty years! And whereas the last few terms of Mateo’s reign saw Torrevieja grow in size and popularity, becoming the Valencian Community’s fifth largest city, Dolon took over in 2011 with Spain’s finances and national political uncertainly abounding, as to what the future would hold for the entire country. Although faced with limited financial resources, Dolon has continued to strive forward and continue to raise the profile of the City of Salt as one of the most important cities in the region, especially in terms of investment and tourism potential.

Some of Torrevieja’s more ambitious projects may have slowed down a little, due to funding not being made available from either Valencia or Madrid, but most, if not all are back on track, if a little behind schedule. Dolon was pleased to announce that “During the summer, all of the City’s major projects will be restarted, including the Semana Santa Museum, the Playa de los Locos satellite Town Hall and the the new market zone.” Due to the size of the new market zone, this has taken longer than first expected to complete, mainly due to drainage issues needing to be addressed, before tarmac could be laid on the area. However, the market is still expected to move to the area beside the water park, in the near future.

Dolon’s major drive is to create more employment opportunities within the municipality. Although the city has relied on residential tourism for almost two decades, a major focus of Dolon’s team is to bring more investment to the city and especially the building of new hotels. To this end, Dolon was pleased to announce that construction will soon begin on a new hotel in La Mata, with another hotel expanding their facilities and applying for four star status, while the largest of the hotel zone plots at Palangre, has been purchased and plans have already been submitted for the construction of two hotels, overlooking Playa de los Locos.

During the last twelve months, Dolon has been very proactive in personally attending tourism and promotional events in Spain and other parts of Europe. Along with Deputy Mayor and Deputy for Provincial Tourism in Alicante, Joaquín Albaladejo, they have worked tirelessly at promoting Torrevieja. One major push has been towards the expanding Russian market, with Torrevieja represented in Moscow and St. Petersburg tourism and business events. Torrevieja is also a major player when it comes to working closing with, and being part of, the Costa Blanca Tourism promotional push at major Tourism Exhibitions, all helping to raise the profile of the city on a global scale.

One of Torrevieja’s projects that seemed to stall is the much heralded Superior Conservatory of Music. Dolon stated that the idea behind the Conservatory is that the focus is for this to be on a par with the Conservatory of Music in Madrid. The Conservatory will offer a facility of excellence for those who already have achieved their first degree and are seeking to raise their standards to the highest level. The town hall have been in talks with many top educational establishments who have expressed an interest in bringing their superior standards to Torrevieja. Of major note is interest from Boston’s Berklee College of Music, which is the largest independent college of contemporary music in the world!

There are two major projects of international interest which are still in the design stages. Of major interest is the International Social Centre, to be located close to the old Railway track’s behind the Citroen Garage, whose initial plans are being reformatted. Dolon also expects an announcement to be made in the next few weeks regarding the winner of the competition to design Torrevieja’s new performance arts centre, a five level building with meeting. rehearsal and performance rooms, to be built on the old Guardia Civil barracks in the centre of town.

The entire port and harbour zone is also being redesigned. Some features from the previous plan look like being kept, but a less ambitious facility is being envisioned for the future. Dolon was delighted with the addition of Torrevieja’s first four star hotel, the Hotel Doña Monse and spa, located in Los Balcones, which is already proving very popular for small events and conferences in the area. Although the lack of major hotel rooms is a minus factor, he was very positive about the future plans for the more regular use of Torrevieja’s excellent International Auditorium for concerts and conferences, which this year has already attracted full houses to see David Bisbal and Raphael.

As he enters his second year in office, Dolon is very positive about the future for Torrevieja. Unemployment is one of the lowest in Spain and both he and his deputy Joaquín Albaladejo are actively looking for new investment opportunities for the city, especially in terms of Tourism and bringing major events to the city. The new Nautical Product Club is already proving popular with all three of Torrevieja marinas working together along with local business, to offer more attractions to visitors. Torrevieja’s Sports City is one of the top facilities in Spain and Sports Tourism is another major promotional drive. He views the new Semana Santa Museum as becoming a new focal point for residents, not only offering a museum but also cafe, restaurant and meeting rooms.

A new municipal transport plan will also be implemented in 2013. This will offer new bus routes and times, bicycle lanes, better disability access and a change to a few of the city’s roads, to allow better and more efficient traffic flow. At the same time, an update on the Citizen Card – Bus Pass – Library Card is also planned. With technology being at the forefront, the Municipal Web Sites will also offer the ability to fill in many form on-line (and in English) that one previously had to go downtown to make a personal visit to do. The main Tourism Office is also relocating to the Paseo Vista Alegre, beside the fountain and iconic Eras de la Sal. This will also be the pilot office for a new Costa Blanca Tourism Network scheme, a one stop shop for all things regarding Costa Blanca Tourism.

Overall, it’s been a very positive year for Eduardo Dolon. Of the pros and cons of his first year in office he said “The highlight of being mayor is to meet with so many residents of Torrevieja. It’s been a pleasure to be able to go to events and meet so many people, especially from the International Community. One of my regrets is that I have not had the time to spend as much time as I would like to in learning and practicing my English. But very slowly, I hope it is improving!”