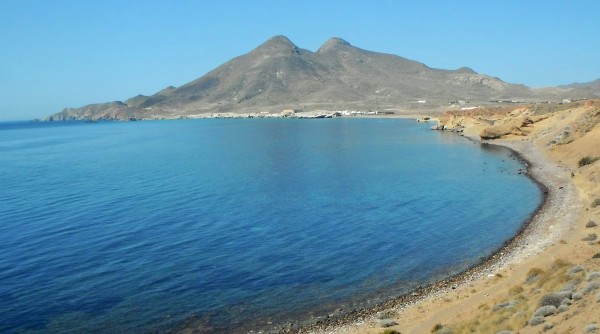 Almería. Instant imagery of swaying palms and summer evening heat on the pavement, where a fusion of Arabic essence meets old-world Spanish charm.  Although Granada is my ‘postal address’ city, Almería has my heart – and I’m delighted to show Steve around – as long as he keeps it to himself, of course.

Start at the top

Where shall we start?  At the top, of course.  The landmark that shouts ‘Almería’ is the fabulous castle, your first sight as you drive in from the west, and pass through the motorway tunnel en-route to the city. And what a castle – Boy’s Own stuff, a ‘proper’ yellow castle of turrets and towers and walls.  Imagine a perfect sandcastle, a childish dream creation on the beach – here it is! 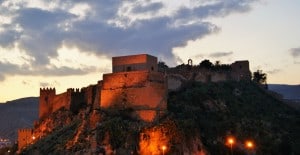 You might see David Bisbal up there, the famous Almería Grammy-winning singer/songwriter.  He made a short film for the tourism board last year, parts of it were filmed as he swash-buckled around the ramparts – clearly he forgot to call me.

The resulting video elucidates the charms of this city and surroundings – see it here if you can wrench your eyes away from Bisbal…although I appreciate he may not have the same effect on you, Steve.

Come down to ground level, and explore the city.  I know, we’ll buy a picnic at the magnificent municipal market and find somewhere to eat it later.  Two floors of the freshest produce and mouth-watering deli goods.  Below stairs an entire floor of fish – too smelly for a picnic but an experience to see – Swordfish en-garde on their icy resting place, expensive red prawns from further up coast in Denia, locals haggling and well-heeled dowagers purchasing the best for weekend lunches en familia.

Just outside the market, we’ll stop for a quick coffee for you, a beer for me at El Quinto Toro where you might change your mind about the coffee when you see the tapa selection.  A traditional bar with atmosphere by the barrel-load.  Always packed and always good – it’s a must. 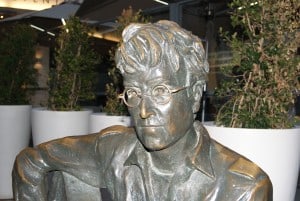 Before our next stop to the Casa del Ciné, how’s your singing voice?  I’ll ask you to sing me a Beatles song.  Strawberry Fields Forever was written right here in ’66 . Now a film museum, John Lennon stayed here, as did many other famous names.  He’s still here in spirit, and in stone – You can sit and chat with him in the Plaza de las Flores – which is a pretty spot, as the name suggests. 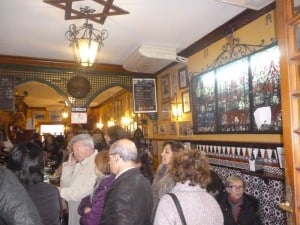 That picnic we packed earlier Steve is begging to be eaten, so let’s motor around the headland to Cabo de Gata and unwrap it there.  White sand beaches and clear waters will be our view, a short hop from the city but seemingly a million miles from civilization.  Nice here, isn’t it?  Pass me another of those local craft beers… 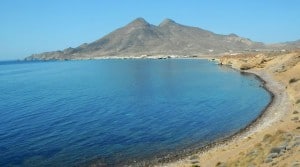 The sun is sinking over the port, and the cafés and bars are setting up for the evening – night-time in Almería is a relaxed affair, outside tables all year round in the sunniest corner of Spain.  But, get up,  we have 2 tickets. We’re off to see my team, UD Almería, the future champions of La Liga.

Hey, you didn’t say anything about creative license… 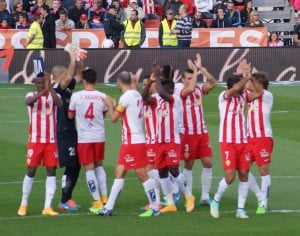 Before you go on your way, Steve, let me put something in your pocket.  An Indalo for the rest of the journey, the lucky  charm of Almería – a charming city in all senses.

Carol writes here and here, and lots of other places too! She adores Spain, travel and ethical natural beauty – and telling her village-life stories.