Things to do and see in Lanzarote 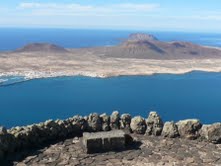 The Mirador del Río visitor centre has been built into the top of the magnificent Risco de Famara cliffs close to the village of Yé on the Northern tip of Lanzarote. When you arrive all you can see is the stunning coast road leading off to the left and a semi circular building made from traditional stone walls at the rear of the car park.

A visit to the Cueva de Los Verdes is a chance to go underground and take a guided walk along a 1km section of a lava tunnel. This tunnel system was a refuge for lanzaroteños during the pirate attacks, there is a well kept surprise too. The cave also includes a natural auditorium there are a range of concerts performed in this location through the year.

The Jameos del Agua was the first site to be created by César Manrique as a cultural centre in Lanzarote which opened back in 1966 and is part of the volcanic tunnel formed with the eruption of the Volcán de la Corona. The Túnel de la Atlántida stretches from la Corona to the sea a distance of 6 km in length and one of the longest tunnels of its kind in the world. Its name “Jameo” refers to the sections where the roof of the tunnel has collapsed leaving an opening in the ground, there are three such openings at the Jameos del Agua they are Jameo Chico, Jameo Grande and Jameo Redondo. 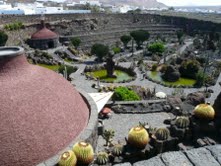 César Manrique found the site of the old disused quarry (el antiguo rofero) and mill (el molino) in Guatiza in the seventies and although work began in 1976, the Jardín de Cactus wasn’t inaugurated until much later in 1990, this would be César’s last project in Lanzarote before his untimely death in 1992. You know you’ve arrived at the Jardín de Cactus when you pull off the road through Guatiza and park in the shadow of the awesome cactus sculpture.

Arrecife has two castles on the waterfront, the Castillo San José sits overlooking Puerto Naos. Now home to the Museo Internacional de Arte Contemporáneo (MIAC), this castle was built between 1776 and 1779 as ordered by King Don Carlos III. It was positioned at the port to look out for pirates and known locally as the ‘Fortress of Hunger’ because the construction helped to provide employment and alleviate hunger for the Conejeros who were struggling against thirst, hunger and disease following the volcanic eruptions.

César Manrique designed the Monumento a la Fecundidad for the geographical centre of Lanzarote which stands at the entrance to the Monumento de Campesino centre. The centre is a museum dedicated to Lanzarote farmers and agriculture. A focal point for Lanzaroteños during their annual pilgrimage to Mancha Blanca in September.

The Montañas del Fuego (Fire Mountains) are the most popular of the Lanzarote attractions for it is here, in the Parque Nacional Timanfaya (National Park Timanfaya) that you will start to understand the true beauty of Lanzarote and the effect that the eruptions in the 1730 – 1736 made to the island.

For more information about Lanzarote, visit our friends at Lanzarote Information