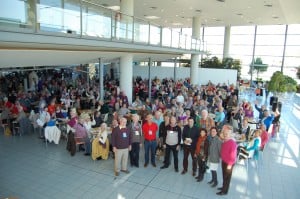 Torrevieja U3A moves to the CMO

UNIVERSITY of the Third Age is one of Torrevieja’s largest clubs, and having outgrown their former meeting place, they moved premises, held their AGM and welcomed Torrevieja’s mayor, all on one busy Monday morning! Eduardo Dolon, Torrevieja’s Mayor, accompanied by Councillor for Foreigners, Rosario Martínez, Councillor for Senior Citizens, Inmaculada Montesinos and the Director of the Foreign Residents Office, Graham Knight, all took time out on Monday January 30, to visit the CMO, Torrevieja’s Centro Municipal de Ocio, located directly behind Carrefour Planet shopping centre and close to Habaneras the Ozone Centre, for the inaugural meeting of the U3A in this fabulous, new location.

Torrevieja U3A has more than 500 active members and 200 of them were present to welcome Eduardo Dolon, who in turn welcomed them to their new ‘home’, where they will hold their meetings on the last Monday of every month. Torrevieja’s most prolific NGO outgrew their former meeting point at La Rustika almost 18-months ago and have been looking for a new meeting place ever since. Club President Bob Hill approached the Town Hall and a new partnership has now been forged between the U3A and town hall, as the CMO will open specially for them, once a month, on what is usually a day when the building is closed.

Mayor Eduardo Dolon was approached by U3A President, Bob Hill last year, inviting him to see for himself the many activities they offer their members, and asking for any help available in finding new premises. For those not aware of their function, the University of the Third Age U3A is an association, which has several branches in various localities around Spain, with the Torrevieja branch opening their doors just five years ago. It consists mainly of British residents who are engaged in many different kinds of socio-cultural activities. To help residents with their integration into Spanish life, they have their very popular Spanish classes, talks on local and Spanish history plus monthly, cultural coach trips to various points around Spain.

Another surprise was in store for U3A members when Francisco, the editor of a new Torrevieja magazine, called Leisure Time, took to the stage, to explain that one of the magazine’s main functions is to help inform residents of all the various cultural, sporting and educational activities that take place around the Southern Costa Blanca. With a background in law enforcement, he also offered to answer any questions posed by members of the U3A regarding such matters as traffic law, how to buy a second hand car and probably the single most contentious issue about driving in Spain, how best to negotiate the dreaded roundabout! Francisco is just one of the speakers who will be giving a talk for the U3A as part of their regular monthly meetings. More information about Leisure Time visit their new site

Enthusiastic volunteers run the entire U3A organisation and new members are always welcome. Their meetings will now take place on the last Monday of each month at the Centro Municipal de Ocio, the Municipal Leisure Centre (CMO) of Torrevieja. For more information on the U3A and all of the different activities they have on offer, please visit their website at www.torreviejau3a.org 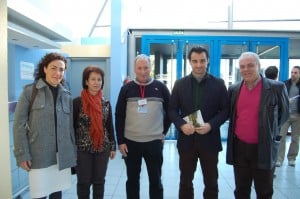