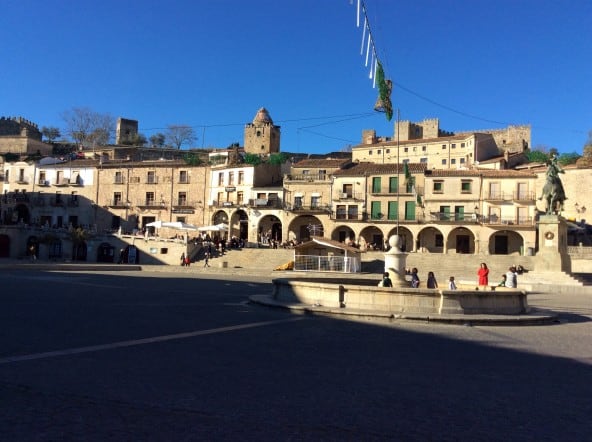 A day out in Trujillo.

My family and I were fortunate enough to have the opportunity to spend a day in Trujillo over Christmas. Trujillo is a lovely town in the province of Cácares. We had travelled there from Sierra de la Orellana where we were staying for a few days and the journey only took about an hour, although it seemed more like several hours seeing as my children insisted on ‘passing the time’ with a game of ‘I Spy’. When the answers include such random, unguessable things as ‘bird line’, ‘bottom’ and ‘Mars’ it tends to have a rather more time-lengthening effect. But in reality, and in less trying company, the journey is really rather picturesque and relaxing.

As is usually the case when we arrive at a new place we spend quite some time driving around trying to get our bearings, which frequently involves having minor panics and visions of getting stuck while driving along some unnerving and increasingly narrow back streets which are so common in the older parts of Spanish towns. Eventually we will decide to park in the first place we find and will set off on foot instead which is exactly what happened in Trujillo. We found an underground car park and edged down the ramp trying to see how much it charged for parking. Unfortunately we were so distracted by this that we didn’t notice we were edging down the exit ramp and a little chap in a high visibility jacket was forced to hurry out of his booth towards us, gesturing that we were on the wrong side of the road and needed to move before a car drove into us and no doubt thinking us rather simple. Luckily we parked with no further complication and once we were bundled up in our coats, scarves, hats and gloves we emerged out into the cold sunshine ready to explore. 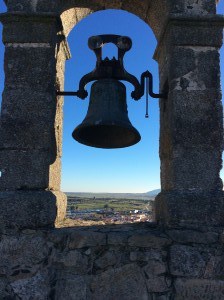 First of all we headed to Plaza Mayor which is a big, open square edged with lots of bars and restaurants. We were there during the Christmas/Three Kings season and so there was a belén and lots of Christmas lights which made it all very festive. Emanating off from the plaza there are lots of little roads that lead you off up into the old town or off along small shopping streets. We went off looking for the castle which we found after climbing our way up some beautiful cobbled streets. We reached the top and I found myself laden down with everybody else’s hats, scarves, coats and gloves as we all over heated from the combination of physical exertion and a surprisingly warm sun. As always seems to be the way for us we got to the castle and it was shut. We had an hour and a quarter until it opened. We walked back down to the plaza stopping at a little tourist shop on the way and trying to persuade the children that no, they really wouldn’t benefit from having a wooden sword emblazoned with the word ‘Trujillo’ on it, and that no, we didn’t believe that they wouldn’t hit each other with them no matter how much they tried to convince us otherwise. After lots of panicked, stereo utterances of ‘don’t touch that!” as the boys moved from one display of ceramic ornaments to another we moved on to the next little shop which seemed much less precarious in that it sold cheese and chorizo and other specialities of the province. As we walked in the shop Henry shouted out, “what’s that smell?” swiftly followed by “yuck, it smells yucky!”. Feeling that perhaps we needed to make amends for our less than acceptable entrance we thought we would buy some locally made sweets. We had a choice of cherry or acorn flavour and due to me having had a very unpleasant indeed experience once involving a bottle of acorn liqueur I decided that cherry would be the better option, despite Henry’s calls of ‘pine cones mummy, can we have the pine cone sweets?” We made our purchase and left, working our way back down to a park near to where we had parked and where the boys could play, we could have a drink and I could deposit the several sheep’s worth of woollen garments that I was still carting round with me back in the car. 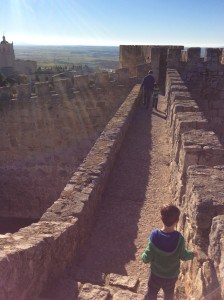 Eventually we returned up to the castle where half of our family spent a very enjoyable time walking around the walls at the top of the castle while the other half of us succumbed to panic attacks and vertigo and rushed off on their jelly legs to get back down to ground level! After visiting the castle we wandered down to and around the town again and came across a sign advertising a planetarium that offered free viewings. Never knowingly passing up a freebie we went to have a look and a happy little planetty looking type chap told us that the next show would start in 5 minutes so we went in to the viewing tent that had big inflatable seating going all around the edge. We lay back as the show started which was all about the solar system. As massive projections of planets, meteor showers and space craft moved over our heads I could have easily fallen asleep in the dark, comfy tent if it hadn’t been for Sam asking ‘what’s that?” and Henry asking “can I sit on your lap?” at regular intervals. The show finished after 20 minutes and despite being invited to watch another one that would be starting soon after we decided to leave and head back down to the car. It was getting late and we still had the prospect of the drive home to come to terms with. 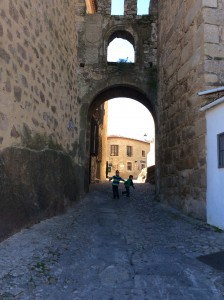 We got back to the garage and checked if anyone needed to go to the toilet before we left. No, they assured us, they were both fine. I paid for the parking and we went to get in the car. “I need a wee!” called out Henry. “Me too!” called out Sam. Oh dear, well, the ticket was valid for 15 minutes from paying so we rushed off to the toilet. After the prerequisite debate over why they have to go in the ladies’ when they are with me they both went into the cubicle together. One minute later I heard “mummy, I can’t open the door!” Great. With time ticking away I eventually managed to coach Sam to turn the lock in the right direction and then we were free and racing to get back to the car before our parking ticket came invalid. The little chap in the high visibility jacket seemed mighty relieved when we were able to exit the garage without endangering ourselves or other drivers and we headed off for home. I won’t inflict details of the journey home on you, needless to say we did play ‘I Spy’ again for what seemed like hours and that our family tradition of choosing only objects that couldn’t actually be spied continued.

We had a very lovely day in Trujillo, though. It is a very friendly, picturesque place and I would definitely recommend it to anyone who is in the area and who has the chance to go.