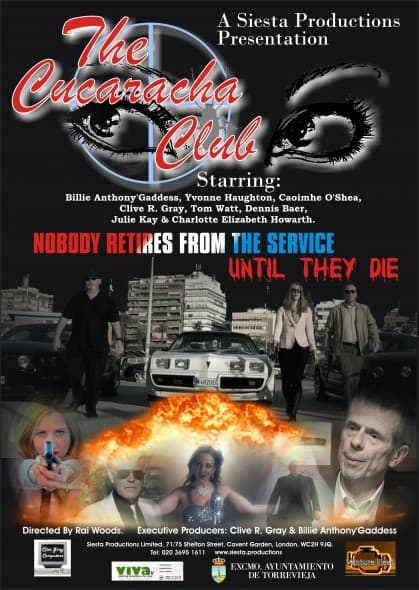 It’s 2008 when an idea suddenly pops into the head of a San Luis actor who was on stage with a local Theatre group. Having been selected at an audition to play an integral part in a Feature film to be shot in the North East of England only whetted the artistic appetite and a story slowly but surely started to find itself being formed in a note book.

Jet Pack forward a couple of years, and we see a team slowly forming to bring the plan to fruition. The promise of a big name British Actor appearing in the production, should it be made, gives a much needed spur when times are hard and people let you down and even make you question your sanity. However, a determination was now starting to fester in the mind and it was suggested, on many occasions, that ‘you’ll never make it’. Then there were the ‘what do you know about film making’ and the hurtful ‘no one will want anything to do with a bunch of locals making a film’.

Well, in fact some comments were spot on because not many people thought it would be made and not many people supported the project. That included many people who simply got involved for the potential fame part of it. Yet despite all the shenanigans, a Phoenix arose and it’s now a completed Feature Film with a top UK Actor and no less than 3 songs written especially for the production by a local writer and musician.

The title track, The Cucaracha Club, is sung by local artiste Chloe Leigh, and backed by The Fabulous Replays. Verity Jo Spencer Hall sings “Give it Wings”, and international comedy entertainer Stevie Spit sings “Don’t Block Out The Light”, all of these penned by Peter Taylor. The team are immensely proud of the high standards achieved by these very talented performers. Furthermore, all 3 singers have parts in the film.

At this point dear reader, we would ask you to remember. This is a no budget production and a community project which is unprecedented and historically noteworthy. Moving forward again, to 2014, a team was brought together to plan and organise this mammoth task. Julie Kay took on the thankless task of fund raising and has grafted constantly. Sometimes having to battle to get locations for events simply because it was ‘not for charity’ but to her credit, she just kept going. Yvonne Haughton helped with the translations and sourced some fantastic American cars for us to play with. Yvonne also translated the script for the subtitles that will appear on screen for our Spanish viewers.

Clive Gray is a computer and technical wizard and has been in charge of all things technical and became our lead cameraman. Clive is also a Director of Siesta Productions, a company we had to set up in order to obtain the required permissions to film in public places in and around Torrevieja. This was in spite of already operating fully registered businesses in Spain.

Local Radio Station owner and presenter Rai Woods came to the rescue and directed the film when our pre-arranged production team failed to travel from the UK due to unforeseen circumstances, and took under his wing as an assistant, Billie Anthony’Gaddess. Billie, along with Philip Stephen Routledge, wrote the screen play. Add into the mix, the legal advice of Charlotte Howarth, and there you have the basics of your hard working production team who had absolutely no idea just what they were letting themselves in for. The mad fools! Ha haaa!

With a Quantum leap, let’s jump forward to 1st September 2015 and a bunch of people arrive at the Delfin Submarine in Torrevieja for a weeks shooting. It was hot on the harbour (40º) and hotter still in the submarine. They came packed with enough supplies as if to stay for a week of Sundays. Here it would be expedient to explain a couple of things. The first question asked was, “Who’s idea was this, to start shooting on the 1st of September in all this heat?” “Yours Billie” was the answer! Tom Watt, the only cast member wearing a suit below deck in about 50º heat and without so much as an ounce of sweat asked, ‘How the hell did you blag a Submarine?’ Jokingly Rai said ‘We haven’t cleared it yet – so hurry up!’ The rest, as they say, is history.

Over the coming months, on large boats, small boats, jet ski’s and aircraft, they grafted. Not to mention the fabulous cars sourced by Yvonne that graced the set. To top everything off, actors flying from the UK at their own expense just to be involved, one for just a 20 second appearance. WOW!

Finally, on the conclusion of filming, the very sexy ladies from the film stripped off to make a 2016 Calendar to help raise much needed funds. The calendar is currently on sale at a number of locations and via the website www.Siesta.Production

“The Cucaracha Club” Feature Film has its World Premieré in Torrevieja on March 10th at the Virgen Del Carmen Theatre. The stars will start arriving at the Red Carpet a little after 6:30 so get down there early, get your souvenir programme and get ready to grab some autographs and selfies.

For further information, visit our website, www.Siesta.Productions or email info@siesta.productions