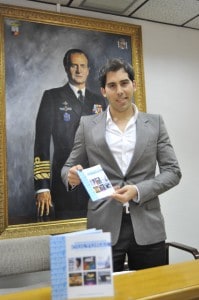 The Ayuntamiento of Torrevieja have published 20,000 copies of a new “CULTURAL AND LEISURE GUIDE” for the spring months of April, May and June. Free copies are available from tourist offices and cultural venues. Below, you will find a list of a few of the items included in the programme over the next couple of months:-

ADVANCE LOOK AT SOME EVENTS INCLUDED WITHIN THE SPRING CULTURAL PROGRAMME:-

SUNDAY 5th MAY at in the Teatro Municipal:- “MARIACHIS SHOW” -typical Mexican style of music presented by ‘Mariachis’ and accompanied by Mexican Ballet. Admission 6€.
THURSDAY 9th MAY afrom 10.40h to 14.00h in the Plaza de la Constitución:- Celebration of “EUROPEAN DAY” includes music and dance from distinct European countries, a ‘civic act and raising of the EU flag and features ‘live’ “The EUROPEAN ALL STARS INTERNATIONAL JAZZ BAND”. All free – not to be missed!!!
SUNDAY 12th MAY at 19.00h in the Teatro Municipal:- The CZECH NATIONAL BALLET present “Swan Lake”. Ticket prices:- 20€ and 30€ depending upon seat row.
MONDAY 13th May at 20.00h in the Centro Cultural Virgen del Carmen:- COASTRIDER MUSIC AWARDS. Admission 6€.
SATURDAY 18th May at 19.30h in the Palacio de la Música:- Choral concert offered by “CANTABILE SINGERS”. Admission fee. Donations to Age Concern.
SUNDAY 19th May at ??? in the Centro Cultural Virgen del Carmen:- Choral concert offered by two local choirs: “Coral José Hodar” (Spanish) and “Crescendo International Choir” (mixed nationalities who sing in English. During this unique concert both choirs will sing together in both English and Spanish.
SUNDAY 30th June at 12.00h in the Doña Sinforosa park:- The “Orbi Playa Big Band” from Canterbury, Kent, offer a mid-day concert in the bandstand of the park.
SATURDAY 6th July at 23.00h in the ‘Concert ground’ in Torrevieja (near to Aquopolis):- Spanish popular singer, MELENDI offers a concert to promote his latest album.