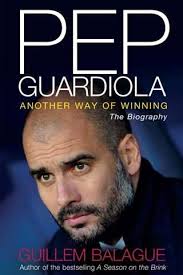 Pep Guardiola, Another Way of Winning
By Guillem Balague

A review by Steve Hall

Guillem Balague has chosen a tricky subject for his latest book, “Pep Guardiola, Another Way of Winning.” He is writing about a living legend whose apparently super-human achievements are now being matched/beaten by his successors. Guardiola is also very much still in the public spotlight and his life/successes are measured intimately and relentlessly. This means that the biography is always at risk of being outdated but Balague has covered this skillfully. The reader does not get the feeling that this is an out-of-date biography but rather that it is an “until now” appraisal of a man one feels confident will always be successful. Yes, whether he decides to turn his hand to football management, the media, a commercial life or stacking shelves in a supermarket, Pep will be a true winner. As you read the 300 plus pages, you are at all times aware that Balague is talking about a genuine “winner”, a renaissance man of the digital age!

In the foreword, Sir Alex Ferguson who is arguably the greatest manager of all time states that “Pep created a culture where players know that if they don’t work hard, they won’t be at the club”, so, perhaps that is the last piece in “another way of winning” The “Barcelona Way” is style, commitment and sheer hard work. Balague uses the respect Ferguson has for Pep very cleverly in a long foreword that sets the scene. The reader immediately realises that the biography will be respectful to Guardiola and well-researched. Respectful without being sycophantic, well-researched without being tedious.

Balague covers the main points in Pep´s life and his playing and management career without it reading like a history lesson where the protagonist is subject to a strictly chronological investigation. Others had already done that successfully. That was not Balaque’s mission. Instead, Balague goes deeper to discover the “another way of winning” of the title. He looks at the Barcelona club and the whole ethos of “Més que un club” (“More than a club”). He covers the development of the unique culture of La Masía where boys from the age of 13 are housed at the club and live and breathe Barcelona 24/7. It is clear that one of Pep’s greatest strengths was that he was only one part of the whole Barcelona culture. Obviously, he made his mark on the club as a hugely successful player and then manager. He was to became part of the whole ethos BUT more importantly – and he would be the first to agree with this – the club was always more important than Pep, his team and his beliefs. It was truly “Més que un club”

So what was “Another way of winning”? Obviously that was partly the successful on-field tactics and here Pep is most usually associated with the tiqui-taca that evolved from the Dutch “Total Football”. Balaque shows that this way is an attitude of mind and not an event, an ethos, a mindset, a 24/7 modus operandi and not just a magic pill administered 10 minutes from kick off.

When his successful football career came to a close, Pep was promoted to manager of the “A” team after the immediate success he enjoyed in his one and only season with the “B” team. By that time, he had, however, been involved with the club for over 20 years and he was quite clear what had to be done to achieve lasting success. In Barcelona terms, the previous two years without a league title had been an abject failure. Pep acted decisively in the summer of 2008 and within weeks of his appointment, there was a huge exodus of players. Giovani dos Santos, Deco, Ronaldinho, Gianluca Zambrotta, Marc Crosas and others all left because they did not fit in with his ethos. Eyelids were immediately raised that a relatively unknown manager was ripping up a relatively successful team. This did not deter him.

Guardiola demanded a harder work ethic than before, but also a more personal approach during training and a closer relationship with his players. He promoted Sergio Busquets and Pedro and brought in Piqué and Alves. His reward was the Liga title in his first year in charge AND the laying of the foundation for his next/last three years. By taking the Liga he proved there was indeed “Another way of winning. Equally importantly, he left the team and the club in a much healthier state than the one he inherited from Rijkaard. Crucially, the backbone of that team including Lionel Messi, Xavi Hernandez, Andres Iniesta, Francesc Fabregas, Carles Puyol, Gerard Pique, Sergio Busquets, and Victor Valdes, had all joined Barcelona as teenagers, learning how to play (and win!) “the Barça way”.

As an obscene simplification Balague shows it as a 4-3-3 that can split to a 2-5-3 or even a 2-4-1-3 within seconds. It is also a formation which even includes the keeper. Balague points out how many touches Valdes gets – very high for a goalkeeper. This is where you see Balague writing at his best. He is at heart a passionate football fan and is deeply knowledgeable about the game. He gives Pep credit for more than tiqui-taca, however successful the team has been and still is with that style. He reminds us the Pep played Eto’o and Zlatan Ibrahimovic as out-and-out strikers. The fact that this was not an unmitigated success probably has more to do with the players’ attitude than a failing in the tactic. He persevered with Eto’o and Zlatan but failed to get them to accept his philosophy and without getting the best out of either. Inevitably both moved on. He did not forget the defensive duties of the team and had rocks in Puyol, Valdes and Piqué producing hugely impressive performances every week. Ahead of them he had possibly the most lethal attacking midfield in European football and up front he brought out the very best of Messi. Pep commented that ” he wanted to transfer the “indescribable pleasure of caressing the ball“. Guardiola wrote in a column for El País. ”In Barcelona it is also understood that you can never win and repeat in a way that does not feel right to you—that does not feel right to the directors, coaches, players, friends of the press and the people who go every week to see them.” Pep always KNEW what he wanted and what he wanted was to develop the “Beautiful Game” at his beautiful club. Yes, Pep set himself the target of winning …….with style! “The Barcelona Way!”

Of course, Pep’s real legacy is that his successor, Tito Vilanova, inherited a superb team with a balance of youth and experience. In 2012/2013 Barcelona started this season breaking records seemingly in every game and after 15 games, they had set the record for the best-ever start to a La Liga season and had won their Champions’ League group with plenty to spare.

All in all, this is a well-written and thought-provoking account of a man who will surely return to the “Beautiful Game” …. and make it more beautiful. Whether it will be Arsenal or Ajax, Manchester City or Manchester United, Chelsea or PSG remains to be seen. Whether he returns to Barcelona or Bari, Balague and the readers all know that one club will get an incredible manager who will bring the winning attitude in a professional but unassuming way. I wish him well.

The last word goes to Andrés Iniesta, “It was a real privilege to be under your orders.” High praise indeed from one of the greatest players of the modern game.