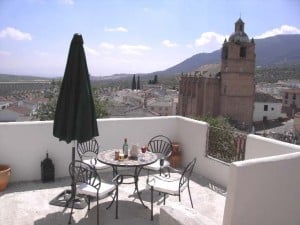 The town of Illora lies in the Poninente Granadino – the district to the west of Granada. Illora is situated on the lower slopes of the Sierra Parapanda mountain range on one side and of the Sierra Madrid on another side. Illora is 792 metres above sea level.

How far is Illora from Granada?

The actual town of Illora lies about 30 kilometres north west of Granada – about a 35 minute drive from the centre of Granada – and approximately the same distance from Granada Airport. Along with the rest of the towns and villages in the Poniente Granadino, it is in the province of Granada, which is part of the semi-autonomous community of Andalucia.

Illora comprises the town of Illora itself along with 5 other villages in the area. Illora has a population of about 6,000 and contains the Ajuntamiento ( town hall ) which is responsible for the administration of the locality.. The villages, which also form a part of Illora are:

Alomartes: Also situated on the lower slopes of the Sierra Parapanda and 4 kilometres from Illora itself. Alomartes is clearly visible from the terraces of casa Pilar Alto, Illora. Alomartes has a population of 2,000 and has a water mill – the only one in Spain using the original system – museum and a very interesting XVIII century church – the Church of Dolores, built in the shape of a greek cross.

Tocon: Tocon is situated about 10 kilometres from Illora, beyond Alomartes and very close to Bracana. Tocon is also the name of the Arabian tower which characterises the village, which has a population of about 1,000.

Escoznar: Situated about 7 kilometres from Illora on the fertile plain clearly visible from the town, Escoznar has a population of almost 1,000 and has a lively village centre. Escoznar is a short distance from Fuente Vaqueros, birthplace of the famous 20th century poet Frederico Garcia Lorca. Fuente Vaqueros has a museum dedicated to the poet, who was executed during Generalissimo Franco’s time, and you can visit the house where he was born and brought up.

Obeilar: You will pass through Obeilar when driving to and from Granada. Situated five kilometres from Illora, Obeilar has the now disused railway station for the town and a population of 600.

Bracana: Bracana is around 12 kilometres from Illora and lies at the base of the Parapanda mountains. There is a very interesting church and Chapel of Davila as well as La Loma and Ventas de Algarra. Bracana has a population of about 500.