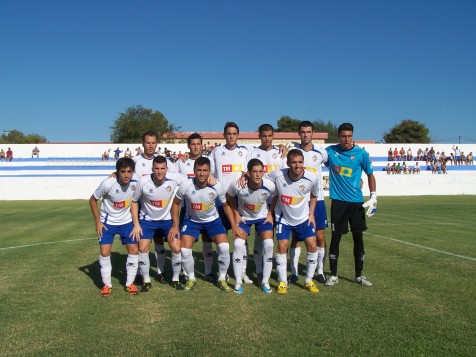 Torrevieja top the league, for now!

TWO games and six points. You can’t ask for much better than that. And although there may still be twelve undefeated sides in this group, only FC Torrevieja can boast a 100% record after this hugely entertaining derby clash with Crevillente. In keeping with the spills and thrills that is the staple diet at the Vicente Garcia, this game was jam packed with all the excitement, tension and thoroughly great football. Torry missed two penalties, squandered a host of other golden opportunities and in the end were hanging on waiting for the final whistle.

The opening goal came on sixteen minutes Ernesto took a free kick and swung the ball on to the towering head of captain Jorge who glanced it deftly into the net. Five minutes later Torry were awarded a penalty and Ernesto stepped up to the mark and smacked the ball hard and on target. However, the keeper guessed the right way and pulled off an excellent save. Torry were one up at half time but Crevillente had also had a man sent off, so omens were good for more goals in the second half.

It has to be said that the standard of refereeing at this level can leave much to be desired. It rare to see ten cards or more in a British game of any level, but in Spain, the man in black sometimes thinks that the game is all about him, and he proceeded to ruin the flow of play, was very inconsistent, and once he started handing out the cards, he was unable to stop himself! During the first half, he also sent off Torry trainer Gines for too vociferously and was sent off – the first of four red cards on the day.

At the re-start Carrasco was felled by Pedro. Rafa then nudged the loose ball away, which the now laughable referee elected to interpret as technically delaying the re-start of play, thus issuing a second caution to the Torry number three and dismissed him from the field of play. It was silly of Rafa to kick the ball in the first place, but this was poor man management from an official who was now in a card frenzy.

Ernesto seemed to wrap up the points for Torry with a snap shot from 25 yards that completely took the keeper by surprise and was nestled in the net before he knew what was happening. the visitors then pulled one back from a corner on 72 minutes that stunned the crowd. The visitors conceded another penalty in the 89th minute. It was Inarejos this time who took the responsibility but his shot was also saved! At the final whistle Torry had picked up a total of six yellows and two reds, to add to their seven yellows and one red from the opening day. Nonetheless, they stand two points clear at the table top after only two games. They now just need to practice their penalties, or quickly get Gasch fit and give him the job!